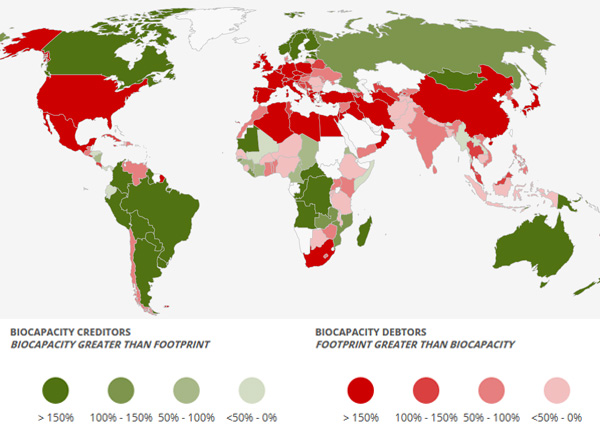 The Footprint Network’s map of global ecological debtors and creditors is one of the key images for this blog. I’ve posted it before, but the Network just updated the map and I’ve been looking at it again. Countries in red below are those that use more of the earth’s resources and services than can be provided within their own borders – ecological debtors. The green countries are those that run an ‘ecological surplus’, where their national biocapacity is greater than their footprint.

This is a really important map, because it reverses the usual understanding of debt and poverty. The countries in red are ecologically ‘in the red’, and rely on the countries in green to provide timber, fish, land, and carbon sequestration.

In this framing of things, countries can score green on the map because they are under-developed – see Eritrea, which has the highest ‘surplus’ of any country. You can also appear green by being large or sparsely populated, like the Scandinavian countries or Russia. Those in red may be over-consuming, or they may have less biocapacity to begin with, such as the North African countries or the Middle East. Given the mixed distribution of resources and consumption, it’s not vital that every country sticks rigidly within its own borders. But globally, things have to balance out.

Unfortunately, more and more countries are shifting from green to red. Despite claims that economic growth will make us greener eventually, development goes hand in hand with ecological damage. Forest are cut down, swamps are drained, rivers run dry, land is converted into pasture, and population grows. A familiar pattern develops – rising footprint, and falling biocapacity per capita. Eventually they cross over and another country goes into ecological debt.

Eventually things tend to level off, if you go and browse the map and click on more developed countries – but they plateau at an unsustainable level. From that unsustainable position of ecological debt, there are two ways back. One is to reduce your footprint, and much of what I write about on this blog is aimed at that side of the equation. It involves a circular economy that can reuse materials and eliminate waste, shifting towards sustainable transport and renewable energy, choosing lower impact lifestyles.

That can be done strategically and deliberately through cultural change, government policy, and progressive business. Or you can do a Greece. A quick glance at the sharp decline in Greece’s footprint, and the link between economic growth and environmental damage is clear once again.

The other way to move towards sustainability is to work on the green line, and that’s something we hear less about. Is it possible to rebuild a country’s biocapacity? Of course it is, and it would involve reforestation, rewilding, opening up watercourses, depaving and restoring damaged landscapes. If this was done at the same time as economic development, then we’d have hit the holy grail of restorative development – the kind that heals rather than destroys.

Cambodia is an interesting case here – the graph of their footprint and biocapacity shows the two falling and then rising together. They cross over and put Cambodia into ecological debt, but its one of the few countries where biocapacity is increasing.

That’s not necessarily anything to celebrate, mind you. Few countries have experienced as much trauma in recent decades as Cambodia, and the environment wasn’t spared either. The Khmer Rouge relied on timber exports to fund their campaign of devastation, clearing forests with no thought to the future.  If that wasn’t enough, many of those displaced by the genocide took refuge in the forests, putting further pressure on natural resources. The end result was a complete collapse of biocapacity – 70% of the country was covered by rainforest in 1970, and that had fallen to just 3% by 2007. So although we have a rare rising green line in Cambodia, and concerted effort to replant and restore, we’re starting from a very low base.

So what does restorative development look like? Cambodia is close, but its historical situation is unusual. The question of the title remains unanswered really. How can poor countries develop, deliver rising living standards, and do it such a way as to restore and enhance the natural environment? How can rich countries move from a quantitative to a qualitative economy, improving the environment and reducing footprints together, so that we cross back over from red to green? These sound to me like some of the most important questions of the 21st century.