The clean energy revolution is dominated by electricity generation and the switch to renewable sources. Renewable heat gets far less attention, and that’s a big problem in Northern countries. In Britain we use more energy heating our homes than we use on anything else. It’s the next big challenge for the transition to a low carbon society. (More on renewable heat here)

The best thing to do about heat is reduce our need for it in the first place, building highly efficient new homes and retrofitting older ones. We can heat our homes more intelligently, just warming the parts of it we occupy. But whatever we do, we’re going to need energy for heat for a long time to come, so we’re going to need clean and renewable sources of heat.

Electric heat is inefficient, so wind and solar don’t offer a great solution for space heating. We can’t rely on wood or biomass at scale. So perhaps one of the most promising solutions is to take our existing heat infrastructure as a starting point and look at green gas. That way we could use the existing grid, and all the boilers, thermostats and radiators we all have fitted at home already. It just needs an alternative to the fossil fuels we use currently, and there are a number of options, many of them using gas from waste in one way or another. Ecotricity are about to pioneer a new one: creating gas from grass. 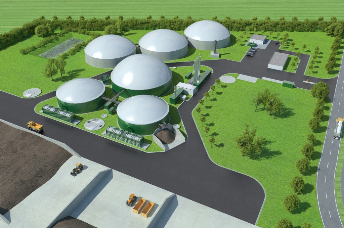 After several years of research, they have just filed the planning application for their first ‘green gas mill’ near Tewkesbury. These will use anaerobic digestion to create the gas, and the feedstock will be grass from local farms. There are a number of advantages to this. It’s renewable, and it’s carbon neutral. Grass can be grown on marginal land, so it doesn’t need to compete with food production, and it supports British farmers. The main waste product from the anaerobic digestion of the grasses would be a natural fertiliser which can be turned back into the soil, improving the land and making the whole process potentially restorative.

As Ecotricity founder Dale Vince says, this method “will produce gas that is carbon neutral, supports food production and is sustainable – with the process actually improving the local environment rather than damaging it – it’s the antithesis of fracking.”

How much gas could we produce that way? Britain has over 8 million hectares of grazing land. With future efficiency measures taken into account, Ecotricity suggest that we could produce 95% of our gas needs from grass by 2035. It’s unlikely that we’ll ever get anywhere near that, but it’s theoretically possible. If the method captures the imagination of the energy companies and the agricultural sector, it could make a significant contribution to the renewable heat conundrum. And with any luck they’ll actually look as green and space-age as the building in Ecotricity’s little picture.

If you’d like to support the idea, you might want to consider switching to Ecotricity as your gas provider. They’re the only company in Britain to offer a green gas tariff, and I’m a satisfied customer myself.