On Monday I wrote about a Maasai activist who has been pioneering a new approach to land ownership in Tanzania. While writing about it, I was reminded of another pioneering project out of the Rift Valley: Kenya’s geothermal energy.

The Kenyan Rift Valley is an area of volcanic activity. Where I was at school, we looked out towards the dormant Mount Longonot, and there were hot springs up in the forest. Further to the West was Hell’s Gate National Park, full of intimidating cliffs, towers of rock, and the geothermal plants that serve Nairobi. 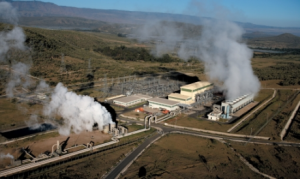 Two further plants have been added since I was last there. The latest opened last year and is the largest geothermal plant in the world. With this plant online, Kenya now gets 51% of its electricity from geothermal, and a further 40% from hydro, giving it an enviably clean energy mix. If plans for Africa’s biggest wind farm hadn’t fallen through a few years ago, Kenya would now be joining the list of countries with 100% renewable energy.

That’s not to imply that geothermal is environmentally benign – Hell’s Gate is a national park, after all. It’s a real balancing act between generating power and protecting local wildlife. Drilling can be disruptive and water-hungry. As Kenya develops and its energy needs grow, that will bring increased pressure on the natural environment. Neither is it uncontroversial politically, given the nomadic people who have traditionally occupied those lands. But the trade-off is that by investing seriously in geothermal, Kenya is leapfrogging fossil fuels. For many people getting connected to the grid for the first time, clean energy is the only kind they will have ever known.

When I was sixteen, a couple of friends and I rode our bikes out to the gates of Olkaria geothermal plant and asked if we could have a look around. They said no, so this video from United Nations University is as close as I’ve got. It predates the latest plant, so it’s a little out of date in its figures, but it’s a good summary of the technology and the issues.