I’m back from my holiday this week. We’ve been in Snowdonia and the Welsh coast. We went up the mountain, into the cloud. It’s a well-trod mountain. The sense of achievement one feels at conquering the highest peak in Wales is tempered somewhat by the presence of a cafe at the summit. Kilimanjaro doesn’t have one of those. Neither does it have a railway for those who want the selfie without the hike. 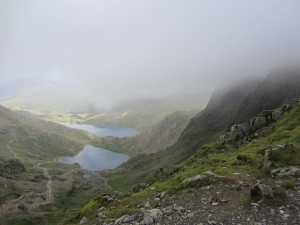 Despite those late additions, Snowdon feels ancient. 450 million years ago it was at the bottom of the sea, and I wish I knew enough geology to understand the colossal forces of ice and fire that have made it what it is.

West Wales is beautiful, and it’s also barren in places. In his book Feral, George Monbiot describes the ‘sheepwrecked’ landscape of the ‘Cambrian desert’, and I can see why some people think he overstates his case. But as he would point out, we ought to know the difference between a natural and a man-made environment. I saw tourist brochures celebrating the ‘unspoilt’ and ‘pristine’ hills, when of course they’ve actually been deforested and then maintained in a bare state by centuries of sheep farming. The rewilding debate, and what we might choose to do or not do with regions such as this, is only really beginning.

For evidence of how a blighted landscape can be restored, a visit to the Centre for Alternative Technology is instructive. Over 35 years, a derelict slate quarry has slowly been turned into a vibrant forest garden, learning center and living demonstration of a greener lifestyle. It’s an extraordinary place that has played a pioneering role in renewable energy, organic agriculture, and decarbonisation. Perhaps solar and wind power don’t really qualify as alternative technologies any more, and CAT could do with more of a cutting edge. Other technologies that they champion, especially around waste treatment and water, are still a long way from the mainstream however. It’s a shame that CAT is so far from anywhere, but it’s well worth a visit if you’re in the area.

Back on the coast, we played on the beach, hung out with the in-laws, watched the Olympics, and worked our way along the ice cream parlours. Ginger ice cream wins. I went out early with the children to look for rabbits in the dunes. I like to read fiction on holiday, so this time it was the haunting mythology of Kazuo Ishiguro’s The Buried Giant, and Marilynne Robinson’s beautifully human Gilead.

We also went crabbing – catching crabs with a bit of bacon fat tied to a long piece of string. We were catching Common Shore Crabs, in their natural habitat off Aberdovey harbour. If you’re catching those same crabs in the US or Australia, you’re dealing with one of the world’s most notorious invasive species. They may look helpless enough in the plastic buckets of chubby English children, but they’ve been known to devastate marine ecosystems in other parts of the world.

So that’s been my week. Now back to work.