Every year flooding costs Britain around a billion pounds. As the climate warms and extreme weather events become more frequent, floods could be more common and more expensive. Severe floods in 2015 have prompted a debate about how to address this growing problem, with the government publishing a new National Flood Resilience Review last week. It looks at key infrastructure sites to protect, flood responses and defences. While it touches on land management, one thing it doesn’t investigate much is the opportunity to let nature prevent floods for us. 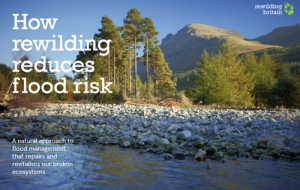 That’s something Rewilding Britain have been working on, and their new report explains the idea. How Rewilding Reduces Flood Risk describes the processes of natural flood management, and shows that they work.

One of the key principles is that flooding causes havoc in towns, but the water has all come in from the country. To prevent it building up too fast and overwhelming urban rivers, rainfall has to be slowed down in the hills and fields. There are a number of ways to do this.

Rewilding Britain is particularly interested in the multiple benefits that could be created by taking the natural approach to flood management. We could plant trees and allow hillsides to revert to forest, reducing flood risk and locking away more carbon. We would create new habitats in the process, welcoming wildlife back and adding beauty and interest for us to enjoy too. By making more room for wetlands we would be re-creating environments with rich potential for biodiversity.

If there are so many benefits to these techniques, why don’t we use them more? The report suggests that most funding goes towards traditional flood defences, meaning natural solutions are overlooked and lack investment. The report has several great case studies, but there’s a real need for more test sites and funding.

Perhaps part of the problem is that when communities are flooded, it’s natural that they want to see a visible difference to river defences as a reassurance that it won’t happen again. They want to see dredging programmes re-instated, floods walls built higher, so they know that something is being done. Upstream solutions are less obvious, out of sight on smaller rivers up in the hills. Even though they are cheaper, more effective, and have multiple benefits, they are less politically appealing than large scale engineering downstream.

So there’s a need for public education about the alternatives. Farmers and landowners may need incentives to manage land and rivers differently, and we need more demonstration projects to show how it can work.