A couple of years ago I wrote about the Gates’ Foundation competition to reinvent the toilet. The aim was to find an innovative design that would leapfrog 2.5 billion people past the classic flush toilet to something better suited to the 21st century – something affordable that could work without a sewer system. The winner was a remarkable piece of kit that broke down waste in solar-powered electro-chemical reactor, and then stored the resulting hydrogen in a fuel cell.

Fabulous. I’d swap my own porcelain throne for one of those any day of the week. But let’s not kid ourselves – if there’s a hydrogen fuel cell involved, it’s not a solution for the world’s poorest people. Bill Gates and his fellow judges forgot themselves in their excitement, and gave first prize to the cleverest toilet, not the most practical. If they’d gone for a genuine appropriate technology, it wouldn’t have been nearly so flashy. (It would have looked more like this.) 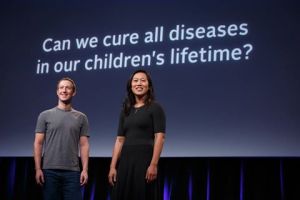 I was reminded of this story this week as I read about the Mark Zuckerberg and Priscilla Chan’s admirable commitment to eradicating disease. Let’s put aside the aim to “cure, prevent or manage” all disease for a moment, and look at the focus of their $3 billion funding. Mark Zuckerberg cites previous successes with smallpox and polio, and then says that it’s a relatively small group of diseases that cause the most trouble. “We can make progress on all of them with the right technology” he adds. In the initiative’s video, their head of science Cori Bargman talks about their ambitions to “develop the transformative technologies”.

They’ve given some examples of the technologies they mean – machine learning, artificial intelligence, and the ‘cell atlas’ that they’re making their first priority. Those are all useful tools, no doubt about it. They’re certainly the kind of thing that would appeal to a Silicon Valley billionaire. But pioneering new tools and using them to find cures is the most glamorous end of medicine. Actually eradicating a disease is far less interesting.

Take polio. The cure for it was developed in 1955. Each dose of the oral vaccine costs 25 US cents in developing countries. When the final eradication comes, it won’t have been about transformative technology so much as the patient, dedicated application of a simple technology.

Or consider the guinea worm, which may well beat polio across the line as the second disease to be wiped from the catalogue of human misfortune. Incidences are down from the millions to the dozens a year worldwide, and yet there is no cure, no vaccine. The only treatment, which I won’t describe here, is as slow and grim as it was when we first discovered it thousands of years ago. The eradication has proceeded not by developing and rolling out a cure, but by educating people about how it spreads. Keep an infected person out of water sources, and you can stop other people picking up the worm.

If you browse the WHO’s top ten causes of death in the world, you’ll find diarrhoea on the list. That’s not something that needs machine learning to solve. People are dying of diarrhoea in the 21st century because they lack even the most basic of medical assistance, and a clean water source. And just as Bill Gates’ Star Trek-worthy toilet will do nothing for those without water and sanitation, the Zuckerbergs’ artificial intelligence isn’t what the world’s most vulnerable people need right now.

Now, none of that is to say that the Chan Zuckerberg Initiative can’t make a difference with their technologies, and I look forward to them solving cancer before I get it. But if they want to mention their initiatives in the same breath as the eradication of smallpox and polio, then they need to be prepared to fund the small stuff, the community projects, the public education programmes, the cheap and effective low-tech solutions and the midwives on bicycles. When it comes down to it, solving the world’s biggest disease problems isn’t exciting. It’s very boring.

The good news is that the Zuckerbergs intend to give away 99% of their wealth, so there’s more where that $3 billion came from. If they want to get the maximum impact from the rest of their resources, let’s hope that they find some less interesting things to fund.