A few years ago I wrote about the Catecar dragonfly, a lightweight electric car that could be charged entirely through its integrated solar panels. It was due to be trialed at airports and on corporate campuses, but the website hasn’t been updated for years and it doesn’t seem to have got out of beta.

That’s a shame, as there are a bunch of reasons why a self-charging solar car would be helpful. Lack of charging infrastructure is holding back wider adoption of electric vehicles. If your car could charge from the sun while parked, even it was just recovering a portion of its overall battery power, that may be enough for many more people’s commute or daily car use. On a sunny day your car would be trickle charging as you drive, and extending the car’s range. And you’d know it was charging on renewable energy, eliminating the main environmental loophole on EVs – if it’s charged on coal power, there’s little point. So with the Catecar apparently gone, is anyone else working on it?

Last year there was a bit of a buzz around the Fisker Karma. An earlier version of this sports car had a solar roof that ran the air conditioning and accessories, a feature that you can get on the Toyota Prius. The roof on the latest version of the Fisker Karma charges the battery too, but this is a high performance car, and it’s a small roof. It’s only going to contribute a tiny fraction of the energy needed. Looks like a token effort to me. 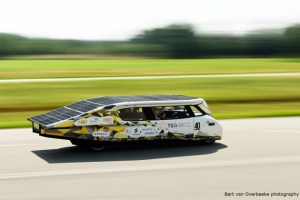 That’s not an accusation you could level at the Stella Lux, the world’s first energy positive family car. Lightweight and clad generously in solar panels, under normal usage it should create more energy than it uses over the course of the year. You can plug it in at home and use it as a domestic battery. Should you wish to take it long distance, at a full charge it will go 1,000 km. The downsides are that it makes no concessions to style, and looks like someone put wheels under a rooftop solar installation. So I’m not sure we can count this just yet.

The rooftop installation is what you get from SolarDrive too. They offer a solar retrofit to electric golf buggies, which is a great idea and there’s no reason why every golf buggy in the world shouldn’t have one. But it’s not a car.

To make any impact in the real world, I’d want to see a big car company looking into this, and the only example I’ve found so far is Ford. They have experimented with a solar roof on the hybrid version of their C-Max hatchback. It’s not a large amount of solar capacity, and not enough to keep the battery charged. Their solution is to pair the car with a special charging canopy that uses Fresnel lenses to direct more sunlight onto the panels. (Those are the same lenses that lighthouses use to amplify their light) Ingeniously, the car can optimise the sunlight it receives by autonomously scooting itself backwards or forwards as the sun moves in the sky.

That’s a clever solution, but not a practical one. Nobody wants to build a new garage that’s tailored to one specific model of car, and I’m not surprised to see that Ford didn’t pursue the idea much further. Ultimately the Fresnel lens canopy is solving the wrong problem. The question to be asking isn’t how to get more light to fall on the panels, but why have you only got 1.5 metres of panel on there in the first place? And the reason is that the solar roof is an afterthought. To do this properly, you’d have to design the car to be solar powered from the start.

That’s what Chinese firm Hanergy are doing. Last year they demonstrated four prototype vehicles that are clad in their own thin-film flexible solar panels. The most practical looking of the four is the Hanergy Solar A. Taking the roof and side panels into account, it has 7.5 square meters of solar panels. The company claims that five to six hours of sunlight would generate sufficient power to drive around 80km – plenty for most people. On a cloudy day or if you need to go further, you can plug it in and a full battery will take the car 350km.

As a global leader in thin-film solar panels, Hanergy have done what no-one else has so far managed to do, and covered the whole car in solar panels rather than just the roof. And it still looks like a car. Unfortunately Hanergy is a solar company, not a car company. Building a new car company is difficult and expensive at the best of times, and Hanergy’s reputation has suffered a fairly catastrophic hit in the last couple of years. Can they finance a project like this? If they can, they’d like to have their solar cars available commercially by 2019. The main reason for the delay is that Hanergy want to wait for the price of batteries to fall a bit further, and then they can price the cars for the mass market.

So we’re a couple of years off the self-charging electric car just yet as a mainstream option. But it does look possible, at least for smaller city cars. I suspect that larger car firms are working on it, and that we’ll have more announcements in 2017. If you hear of any, let me know.