By 2025, an estimated 1.6 billion people will be in substandard and overcrowded housing. That’s an extraordinary number to provide houses for, and it’s hard to know where the funds or materials will come from to deliver them. The existing housing industry, whether private or public, doesn’t look equipped to build that many homes. That means there’s an opportunity for new ideas and new solutions in the housing sector.

That’s an opportunity that was spotted by Indian entrepreneur Rhea Silva, who set up Chototel at the age of 24. Her focus is on the poorest in society, as she explained in an article for the Telegraph:

The first people to be priced out of urban rental markets are the lowest-paid – service workers – so I started looking into a way to deliver safe, clean yet basic accommodation for around 10pc of the average service worker’s pay packet.

The challenge was to develop a form of housing that was clean and functional and fully equipped, but affordable for India’s urban poor. Residents should have running water, electricity and gas. And this isn’t a charity. In order to make a real dent in that 1.6 billion figure, you can’t depend on donors or grant funding. It needs a scaleable and sustainable business model. Chototel will run for profit as a social enterprise, and is a certified B-Corporation.

A lot of innovative ideas were required. First, Chototel functions as a hotel rather than trying to build individual homes. Customers will pay just $2 a night for a room, which sleeps four. This keeps it accessible and low commitment. If that sounds more precarious than renting your own place, it’s worth bearing in mind that residents will be industrial workers who would have been sleeping on the streets or in makeshift shacks before.

Secondly, Chototel automates as much as possible. Guests check in and out, and pay their bills on a mobile phone app, reducing staff and managements costs. Smart technology balances energy use across the building, keeping prices down for residents. In fact, so much of their business model depends on technology that Chototel describe themselves as a ‘a tech start-up in the housing sector’. 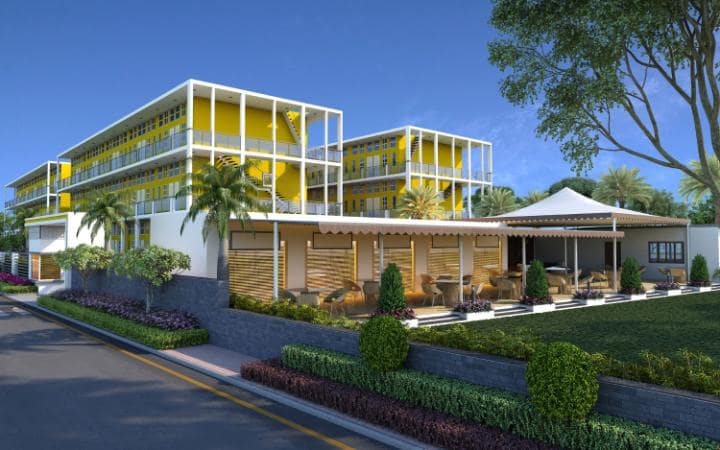 Another key element is fast modular construction. The hotels will use no bricks or wood, and rely instead on insulated panels on a steel frame. That creates economics of scale and reduces build time and the need for skilled labour. Cheap and smart construction techniques are vital if the building is every going to turn a profit at such low rates. Not that cheap means poor quality – they need to be well insulated to keep energy costs down, and they shouldn’t need any heating or cooling. Each building will be self-sufficient in energy through solar PV and battery storage. Cooking gas will be provided through biogas systems using resident’s waste. Wastewater will be treated on site, and the building includes rainwater harvesting and grey water catchment systems.

Another way that costs are reduced is by forming committees of residents to run the building and manage public spaces themselves. Committees will be made up of people who don’t work full time, and they will be compensated in discounted accomodation or paid, depending on their level of commitment. This takes the pressure off single-income families, creating opportunities for women in particular.

It’s a bold experiment.  If it succeeds, Chototel have plans to try something similar in developed countries too – they’re based in London rather than India, and have truly global ambitions.

Will it work? We’ll have to wait and see. The first hotel has broken ground in Nagothane, near Mumbai. It will have 240 rooms, each with their own tiny bathrooms and kitchens. There’s a playground and an infirmary, and bike hire for $0.18 a day. It looks fabulous.

However, the economics of the project are pretty unforgiving. The buildings are going to have to be quite radically cost effective to build and to run. The company isn’t going to go bust if it doesn’t work as planned. If it’s a nice place to stay they can always raise prices to break even, maybe pitch it to backpackers and tourists. It’s the social aim of housing industrial workers that’s the ambitious and tricky bit. Can they really keep prices that low and still make enough profit to build more hotels? If they can raise enough money to get economies of scale right from the word go, and their backers are patient for a few years, then I suspect the answer is yes – and then we’d have a genuinely transformative business.

I’ll be keeping an eye on this one.