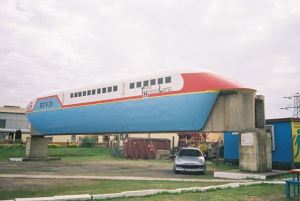 If you’ve ever traveled on Britain’s East Coast mainline, you may have idly looked out the train window around Peterborough and seen this curious sight. It looks like a plane with no wings, perched on a concrete beam.

It is in fact all that remains of the hovertrain, a prototype high speed rail system that was developed in the late 60s. The idea was to float the train car on a cushion of air, and then fire it along a concrete monorail with a linear motor. A one mile test track was constructed in Cambridgeshire, at considerable expense, and you can see it in action in this short documentary. The rail industry wasn’t really interested, and state funding was pulled before it got any further than the test vehicle. Prototype RTV 31 now sits rather neglected at the Railworld visitor attraction, and the ‘floating train of the future’ never came to be.

I am reminded of the hovertrain when I read about Hyperloop, the new high speed concept shaping up in the desert in Nevada. The idea is to float a train car on a cushion of air, and fire it down a steel pipe with a linear motor. Because the pressure can be reduced inside the tube, resistance is much lower, like flying a plane at high altitude. This dramatically reduces the fuel needed to achieve very high speeds, with planned speeds of over 600 mph.

Last week Hyperloop One revealed their first full size prototype vehicle. They already have a stretch of pipe, so they’re now right around the point that Hovertrain got too, maybe a little behind. Are the ‘floating trains of the future’ on this time? Or will this sleek black and blue vehicle be rusting in a museum in a few decades time?

There are several key differences between these two projects. One important one is that the hovertrain was being developed in Britain under a nationalised rail system. If British Rail didn’t want it, there was no one else to sell to. And it was running on government research grants, building on some excitement around hovercrafts at the time. Hyperloop is being developed by three or four competing companies, all working from an initial pilot study by Elon Musk. They are attracting start-up funding, and bidding for contracts from around the world to deliver the technology as a commercial proposition.

Not all of those companies are likely to make it, and I suspect some people are going to lose their shirts, but the technology itself has a much better chance than the hovertrain ever did. On the other hand, building a rail system isn’t like Silicon Valley’s usual projects. Online businesses, software or consumer electronics are much easier to get to market than a massive infrastructure venture like this one, so easily bogged down in legislation, land ownership, or competing claims from other forms of transport.

I’d like to see Hyperloop succeed. If it comes anywhere near the promise of a 35 minute run from San Francisco to LA for a $20 ticket, then you’d have a system that would take people out of cars and planes, and onto something much less energy intensive. It could be revolutionary. And it could be green – depending on how you provide the electricity, as I presume it would need more than the solar panels that are expected to run along the outside of the tube.

As far as Hyperloop One are concerned, they’re developing “the first brand new mode of transportation in more than 100 years”, and they have pictures of the moon landing on their website alongside photos of their prototype. So the levels of hype are pretty high for something that is pretty much unproven.

We don’t know if it will work, or what it will cost, or what the full environmental impact will be. It’s too early to tell. But I’ll be keeping an eye on this one.