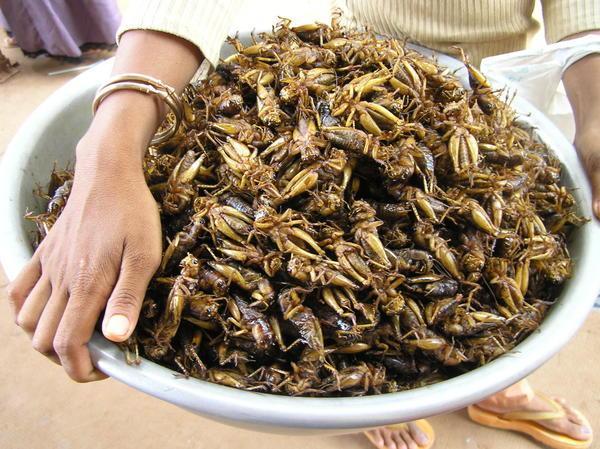 When I was at primary school in Madagascar, I had a game that I played with a friend of mine in the playground. We’d get thin canes, about six feet long, and go out into the long grass to look for grasshoppers. You couldn’t get close to them or they’d fly away, but if you crouched down and moved slowly you could get into range without them jumping. Then it was a matter of bringing the cane down fast enough and accurately enough to whack the insect.

It felt like a game to me, but this wasn’t gratuitous slaughter. We’d bag up our catch, and my friend would take the grasshoppers home with him at lunch time, and then bring them back fried and salted for an afternoon snack. This was normal for him, though the other children would tease him for it. Eating insects was a sign of poverty and I was the only one who would join him in catching them.

Back at home, I remember some men coming to do some building work, and watching them catch big grey beetles from the trees down the side of the house. They were to go with their rice after work. I didn’t get to try any this time, but they did give me one to play with. They tied a little loop of thread round the leg of the beetle, and I held the other end and watched it fly in confused circles.

Where I come from, there’s nothing particularly odd about eating insects. I got the impression it wasn’t common in the city, and neither was it aspirational, but it certainly wasn’t disgusting or strange. More people ate them in the countryside. A study in 2013 found that people in rural Madagascar eat some 65 different kinds of insect, depending on the season.

Here in Britain, it’s a different matter. Eating insects is an activity for survivalists or freak-shows – most notoriously the ‘bush tucker trials’ in the sadistic ‘reality’ TV show I’m a celebrity, get me out of here. Nobody eats insects, with the possible exception of novelties such as chocolate covered ants, or bottles of Mezcal with the larvae in them. But even those are only bought to freak out your friends.

That’s a shame, because insects are one of the most sustainable sources of protein on the planet. They can be raised with a fraction of the water and land needed for most livestock, and with much lower greenhouse gas emissions. Feeding the world’s growing population is a major challenge, and insect protein is a really useful tool in the box.

I’ve been saying this for ten years, and there hasn’t been much to show for it really. That began to change recently, and this time last year I was able to highlight a few pioneering companies. When I came to revisit the topic this summer, I discovered that the number of insect foods on the market has boomed. There are all sorts of companies crawling out of the woodwork, so to speak.

So it’s time to put my mouth where my mouth is and try some insect foods. I’ve been in touch with a number of companies and sourced a range of different products, and over the next few weeks I’m going to try them out. I’m interested in what they taste like, and I hope to find a few things I can actually add to our household diet on a more regular basis. I’m also interested in what the obstacles to wider adoption might be, and how far we are from a tipping point where insects become a normal food. I’m curious to see how the children react, and whether I can persuade my wife to try any of them at all…