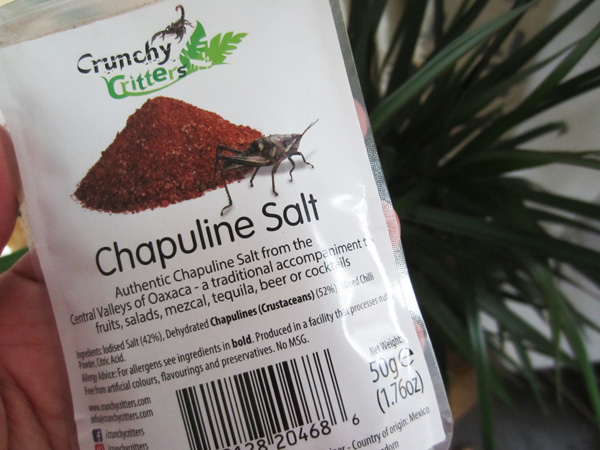 As I’ve been investigating insect foods over the summer, one thing is strikingly obvious – squeamishness about insects is a uniquely Western phenomenon. 80% of the world already eats insects in one form or another. Insect protein already is feeding the world, and an estimated 2 billion people eat them regularly. So really, it’s just us that have a problem.

Does that matter? Why can’t we leave other cultures to eat insects, and carry on with the meats that we prefer? Like British attitudes towards the French eating snails – fine if you like that sort of thing, but keep it on your side of the Channel please.

I think there are two reasons why it’s worth promoting insect eating in the West. First, our current diets are unsustainable. The amount of beef that we eat is especially problematic. Huge amounts of land are given over to ranching, and the greenhouse gas emissions are formidable. The Western diet has to change.

Secondly, a lot of people aspire to a Western diet. It’s got the power of American culture and advertising behind it, the lure of the hamburger and the steak. As countries develop and globalize, people who may not have traditionally eaten much meat begin to consume more (see China’s beef consumption). In some places, eating insects is seen as a traditional food of the past that should be left behind. That’s not true everywhere, but it would be a shame if Western options were seen as superior when they’re really not. Eating insects is healthier and more sustainable than the red meat consumed across the US and Europe.

So yes, it’s worth promoting insect foods in the West. Our food culture has changed before, and it will change again. I know that many of you are still thinking ‘yuck, never’. You tell me so in the comments. But I don’t think it’s a lost cause by any means.

One reason for optimism is that there is a rich culture around eating insects that we are missing out on. The 80% of the world that eats them knows something that we don’t – that insects can be delicious. Sure, there are peasant foods and last resort bugs being eaten in some regions, but plenty of people eat them out of choice. There are all kinds of delicacies and culinary traditions waiting to be discovered. 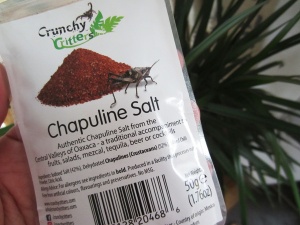 As I set out to try insects, I don’t want to just try the new insect products like cricket pasta. I’m also looking out for insect foods that could translate directly across and be enjoyed in Britain. And that brings me to this week’s tasting notes: chapuline salts.

Chapulines are a type of grasshopper that is popular in parts of Mexico. They are eaten as a snack, or rolled up in tacos. You can also grind them up into chapuline salt ans use it as a seasoning for salads, meat, eggs or fish. The salt, made of toasted chapulines, chilli, lime and garlic, is also used alongside tequila, mescal or beer.

What’s it like? Salty, spicy, with a grainy crunch. There’s a sour tang, and a sort of husky savoury which I take to be the grasshoppers. It’s good. I can’t say I’ve ever bothered with ‘beer salts’, but for the purposes of research I pair it with a beer from the corner shop that purports to be Mexican. Yep. In Britain we serve crisps or salted nuts with beer, and the logic is the same. Why not grasshopper salt?

I try the salt with fish, and dust it on top of a bean chilli. All good. I’m going to try using it as a spice rub at my next barbecue, and I’ve heard it goes well with avocado.

As a seasoning, this isn’t going to do much for feeding the world. What it provides instead is a non-threatening talking point that could be a gateway to other insect foods. Trendy London bars could offer this with beer, or around the rim of a cocktail glass. You could put this on the table for guests as a seasoning, serve it with a Mexican meal, and it would be an insect food that your friends would eat and enjoy. It’s a little access point that helps to normalise eating insects.

In summary, chapuline salts are a Mexican seasoning that we could easily use in Britain. It could be commercialized and used more widely. And perhaps, if people try and it and enjoy it, it would smooth the way for eating grasshoppers in other forms.

Where can you get it? I got mine from Crunchy Critters, which has the biggest range of edible insects on the market in Britain. American readers can pick up something similar from Merci Mercado, Zocalito, or Mexican food stores.