Over the last few weeks I’ve been trying out various insect foods on the family. We’ve had pasta and seasonings, falafels and cricket chips. We’ve established that insect foods can be tasty and non-threatening. But I’m curious to see if, now that we’ve broken the ice, we’re ready for something a little more leggy.

I’m concerned that if I jump straight to a locust stir fry it could ruin all my good ground work, so I look around for the smallest insects available. I settle on wild black ants, a delicacy in some parts of the world. 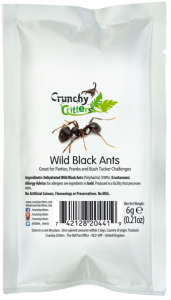 These ants are from Thailand, and they cost £3.49 for 6 grams. It’s about a tablespoon. At that price, a kilo would cost £580 – cheaper than caviar, but still pretty extraordinary. And that brings me to one of the main things I’ve learned so far about insect foods: they’re expensive. I can afford to be curious and try these things once, but I can’t afford to be an early adopter. The market for insect foods is still very young. Supply lines aren’t 100% reliable, as you can tell from the number of retailers with ‘out of stock’ signs up.

If you’re buying cricket flour in Europe or the US, it’s very expensive. Grilo charge $49 for less than half a kilo. At those sorts of prices, this is an elite and highly specialist food. It won’t be that expensive for long though. Crickets sell for $4 a kilo on the markets in Thailand, according to the folks at Bugsolutely. As businesses develop international supply chains and tap into well established insects farms in the East, prices will fall.

Another issue is scale. At the moment every insect food is pioneering, and a pretty risky venture. There are lots of little startups that are essentially cottage industries, and a number of them have gone bust already. At the moment nobody is getting the economies of scale that will bring prices down. But again, that will happen too. The bigger companies are getting on board. You know those meatballs that Ikea sell? There is talk of an insect version as the company experiments with insect food as part of its business accelerator programme. Once you’ve got that kind of brand on board, the economics will change dramatically.

Now to my ants. I crack open the tiny tub. It’s full right to the brim with tiny jet-black creatures, though you can’t really tell what they are from the look of them. It looks like someone has scraped the black bits off burnt toast and, funnily enough, that’s the texture too – very dry, very crispy. Very tasty too. There’s a distinct tang from the formic acid, and this is the first insect food I’ve tried with a strong and distinctive flavour of its own. Ants are genuinely delicious.

Not sure what to do with them though. With this minuscule quantity of them they’re never going to make a meal. I spread some soft cheese on a cracker and sprinkle it with ants for the kids. They’re delighted with the idea. Zach goes first and is impressed. Eden follows and she likes them too. Lou hides in the kitchen, refusing to even look at what we’re eating. As she always said, my wife has drawn the line at eating actual insects as insects.

Where next? I’ve got a couple more things I want to try, and a couple more topics I want to explore. As you can tell, I’m taking each post as an opportunity to investigate insect eating in more detail. I still plan to look at insect meat substitutes, and insects as feed for other animals, including cats and dogs. And then maybe I’ll stop, and it will be safe for my wife to come back into the kitchen.