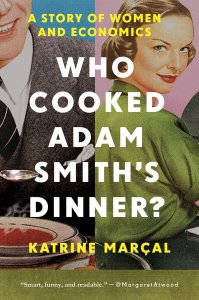 Adam Smith is often described as the father of modern economics, and his descriptions of the market and how they function have become the foundations of the discipline. “It is not from the benevolence of the butcher, the brewer, or the baker, that we expect our dinner” he famously wrote, “but from their regard to their own self-interest”. But what about Smith’s own dinner, asks Katrine Marçal.

Adam Smith never married, and he lived with his mother. She cooked his dinner. And back in their respective homes, the butcher, baker and brewer probably had wives cooking theirs, and doing the washing, and raising the children. “However you look at the market” writes Marçal, ” it is always built on another economy. An economy that we rarely discuss.”

Who’s doing all the work in that invisible economy? Women. Globally, two thirds of the work that women do is unpaid – mainly housework and care. For men the figure is around a quarter. The economy has always relied on the uncounted and literally unvalued work of women. Adam Smith didn’t notice it and didn’t factor it into his economics. And 250 years later we’re still not paying attention.

Who cooked Adam Smith’s dinner? seeks to remedy this situation with a feminist perspective on economics. The author points out the flaws right at the heart of economics, and explains how the consequences of this blindness unfold. For a start, it helps to explain the inequality between men and women, the gaps in pay, why 70% of the world’s poorest are women, why women around the world have worse working conditions, find it harder to access healthcare, get credit or start businesses. But it doesn’t serve men either. Our vision of ‘economic man’ as a rational, maximising individual constantly discounts the importance of relationships, cooperation, altruism, and community in how life actually works. It discounts the role of the human body, of love, and the fact that the starting point of every human life is total helpless dependence.

We’ve built our economics on the assumption that people are selfish and rational, and have continued with these assumptions despite all the evidence that we are more complicated than that. “We govern the world from a place of not knowing who we are”, and if we’re misreading what it is to be human, then it’s hardly surprising that we create institutional structures that don’t serve human flourishing. We create economies that put profits above people, that benefit the richest first, and harm the poor most when they falter. How on earth could you create a functioning economic system with so  much missing information? “If you want the full picture of the economy you can’t ignore what half the population is doing half of the time.”

There are plenty of take-downs of ‘economic man’ out there, but there are few as perceptive as this one. Marçal takes it one step further, looking at the underlying psychology behind our insistence that people are rational, selfish individuals. This idealised view of humanity reveals our insecurities, Marçal suggests – our fear of being dependent, of losing control.

There are few books on economics that are such a joy to read, I should add. Who cooked Adam Smith’s dinner? is written with flair and wit, in a straightforward, almost epigramatic style. It’s full of wisdom, humanity, and righteous anger. (Credit should go to the translator too, Saskia Vogel, as the book was originally written in Swedish.) If you’ve never read anything on feminist economics, this is a great introduction.