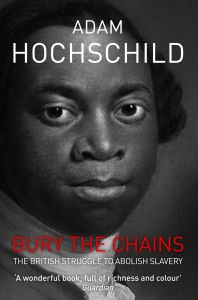 Bury the Chains is a history of the abolition movement in Britain. The ending of the slave trade in the British Empire is one of the great stories of activism, and it is retold here with a fine balance between historical detail and pacy narrative.

Most of us in Britain learn about the slave trade at school. The usual version of the story revolves around William Wilberforce, but he was the parliamentary spokesperson for a wide movement. Hochschild’s book is able to set the parliamentary showdowns in their full context, highlighting the role of dozens of other characters.

Chief among them is Thomas Clarkson, who oversaw the grassroots campaigning, traveling the length and breath of the country to get petitions signed, or to track down witnesses who could give first-hand accounts of the slave trade. We meet lawyers and priests, discover the role of the Quakers, women’s networks, and early fair-trade businessmen. I particularly appreciated reading more about Elizabeth Heyrick, a radical campaigner who kicked the movement back into action as it atrophied in its later years. On the other side, we also see the forces lined up against them, from the MPs who owned slaves, to the Church of England’s plantations in the West Indies, to ordinary citizens with a small stake in slave ship ventures, or the cities of Bristol and Liverpool where so many people’s jobs depended on the trade.

One interesting aspect of the story is that it took 51 years from the formation of the committee to the final emancipation of the slaves, and in that time the movement pioneered a huge range of campaigning strategies. Boycotts, investigative journalism, the book tour, campaign newsletters and fundraising appeals, through to more unusual ideas such as children’s books or poetry. “This small group of people not only helped to end one of the worst of human injustices in the most powerful empire of its time; they also forged virtually every important tool used by citizens’ movements in democratic countries today.”

Not that they were saints. Hochschild doesn’t gloss over the problems with the abolitionists, who ran a pious and paternalistic campaign for an oppressed people, but didn’t want equal rights. Many wanted to end the trade, but argued against freeing those already in slavery. Wilberforce himself voted against every other progressive issue of the day except the slave trade, and believed that the slaves would be a “grateful peasantry” after abolition, still in service to their white masters. Black voices were often absent, with powerful African campaigners like Olauda Equiano acting independently of the leading Society for the Abolition of the Slave Trade.

Nevertheless, there is a genuine heroism in these campaigners. Not usually in acts of daring, though some of them did risk their lives and reputations. It’s the heroism of patient endurance, of picking up after a loss and carrying on, and not losing the belief that things can change – a belief with roots deep in the abolitionist’s Christian faith.

I picked up Bury the Chains after a recommendation in Duncan Green’s book How Change Happens, and I’m glad I made time for it. It’s an inspiring story, well told. It’s honest to the realities of the slave trade, and brutal in places. There’s loads here that doesn’t get mentioned in popular retellings of the story, including the experimental society of freed slaves in Sierra Leone. or the empire’s humiliating defeat at the hands of an army of rebel slaves in what is now Haiti. The role of the French revolution, and of electoral reform, are interwoven. And Hochschild is fascinated by the question of why it happened in Britain at the time it did, and not elsewhere – a free press, good roads and an efficient postal service being part of the answer.

Finally, it’s worth reading the story of abolition because it marks a kind of breakthrough in human history. “There is always something mysterious about human empathy, and when we feel it and when we don’t” says Hochschild. “The campaign in England was something never seen before: it was the first time a large number of people became outraged, and stayed outraged for many years, over someone else’s rights. And most startling of all, the rights of people of another colour, on another continent.”

In our modern world, where many of the challenges we face are truly global in scope, we need that broader sense of human empathy more than ever.