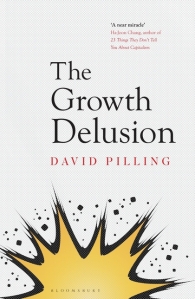 A few years ago books that were sceptical of economic growth were written by environmentalists or maverick economists, and issued by specialist presses and academic publishers. The Growth Delusion shows how things have shifted. It’s written by David Pilling, Africa editor for the Financial Times. And it’s published by Bloomsbury – the home of Harry Potter. That’s got to make this the most mainstream postgrowth book yet.

There are good reasons why growth scepticism is on the rise. When the economy was ticking along nicely, there was no need to ask questions about it. And then when the economy tanked, everyone was talking about the crisis. It’s only now, ten years on, that we can look at growth and think critically about it. We desperately wanted growth after the recession. But has it done us any good?

As Pilling says in the introduction: “If your country’s economy is growing solely because the rich are getting richer and you are working harder and harder just to maintain your living standard, then you are entitled to ask what, precisely, is all this growth for?”

It’s those sorts of questions that The Growth Delusion addresses. It’s not of the degrowth school. It’s sceptical rather than anti-growth, interested in the things that GDP can’t count properly. That includes services, inequality, wealth (as opposed to income) the internet, and much else besides – a real problem in advanced economies with a large service sector.

It’s also a problem in developing countries, in different ways. Subsistence farmers, hunter gatherers and pastoralists contribute very little, if anything, to the formal economy. It gets slightly ridiculous when you consider that, by the UN’s estimation, there are 2 billion such people. That’s over 25% of the world’s population that is invisible to GDP.

Pilling explores various topics around GDP, basing each one on a country. Iceland demonstrates how a country can experience rapid but entirely empty growth. China is a platform for talking about how growth comes at the expense of the environment, India is a case study in how growth is political. The author reports from each place, meeting relevant experts who can shed light on the different aspects of GDP. We get snippets of descriptive detail, just enough set the scene without hiving off into personal travelogue.

One thing that I particularly appreciate here is that the book includes voices that are underrepresented in the postgrowth debate: the statisticians. We might occasionally hear from them, but not these ones. Being a journalist, Pilling likes to go and talk to people in person. So we get to meet the head of Kenya’s statistics bureau, and the guy who compiles Maryland’s Genuine Progress Indicator. Or Niu Wenyuan, who has spent years trying to encourage the Chinese government to adopt a revised methodology that he calls ‘green GDP’. They bring a useful perspective, because they know the limits of GDP as a number. They’re under no illusions, and it makes it clear that the problem isn’t necessarily GDP itself. It’s the over-reliance on it as a guide to policy, the one metric to rule them all. The real issue is with policy-makers.

I also appreciated that Pilling sees the difference between growth in rich and poor countries. “If you are poor, economic growth can be transformative” he writes. “In the richer world the whole idea of growth – at least as conventionally measured – may need to be overhauled.” He suggests that those of us in the latter category could be looking more at quality rather than quantity, something I explore in my own forthcoming book.

The final sections of the book investigate complementary metrics of various kinds. We meet Lord Layard, author and chief spokesperson for Happiness. The Human Development Index and Genuine Progress Index are explained, and some of the ways that countries have calculated wellbeing. As far as Pilling is concerned these should be used alongside GDP, not as a replacement. We should use a variety of quality statistics to guide policy. “Sometimes more income will help us achieve what we want. Sometimes it will not. But more income – more GDP – should never itself be the goal.”

I’ve read dozens of books about growth and GDP by now, but this one stands out. It’s written with a healthy journalistic scepticism, with courage and with wit. It clips along at a good pace, and has more fun with the topic than it has any right to. If you’ve never read a book on growth, maybe this is the one you’ve been waiting for.