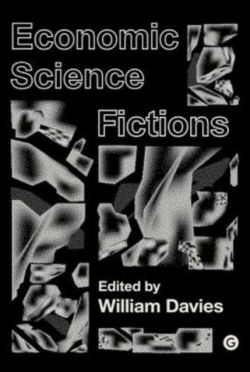 What do we learn if we read economics and science fiction alongside each other? That’s the question behind this new collection of essays, edited by William Davies. “What we call ‘the economy’ is a mixture of empirical facts, expectations, fantasies and shared narratives” he writes. It combines the scientific elements of statistics and management, and more fictional elements in the stories we tell ourselves about how the economy works. We can look at how fiction functions in economics, how economics functions in fiction – and while we’re at it, come up with a better front cover.

It’s an interesting idea, and once you starting thinking about the overlap between the two fields, there are some obviously fertile territories to explore. Laura Horn gets stuck into the evil corporations that so often feature in science fiction. She points out that the stories we tell almost always involve heroic revolutionaries bringing them down, but they rarely explore what comes next. In that way, she argues, they may actually reinforce the idea that there is no alternative to corporate power.

Brian Willems looks at the automated economy run by an AI in Robert Heinlein’s classic The Moon is a Harsh Mistress. He compares it to Project Cybersyn, instigated during the brief presidency of Salvador Allende in Chile in the 1970s. The project attempted to devolve the running of the country’s socialist economy to a computer, and it was running as an advanced prototype in 1973 when it was swiftly and symbolically destroyed by General Pinochet’s military coup. That’s a story I’d never heard before.

Another unexpected story is told by Owen Hatherley, an architectural writer who takes us on a tour of housing projects in Moscow. A third of the Russian population was rehoused between 1957 and 1963, which is an extraordinary achievement, however dismal those tower blocks turned out to be. Hatherley gives us an illustrated travelogue through three distinct estates, with notes on the philosophy behind them, including the communist government’s ambitions for full automation, a four hour working day, and flying cars. Alas, Muscovites only got the first part of it, the identical grey tower blocks, but it’s a great example of an economic science fiction.

I also enjoyed Mark R Johnson’s contribution, and I was sold on the title alone: ‘Megastructures, Superweapons and Global Architectures in Science Fiction Computer Games’. It explores the constructs in games such as Halo, Half Life and, a particular favourite of mine, the Mass Effect series, speculating on how massive orbiting structures were funded and built. (‘Enslave an alien race’ is usually step one.)

Like all books with a wide variety of contributors, not everything hits the mark. A chapter on ‘extraction’, references The Matrix and the organ harvesting of Kazuo Ishiguro’s Never Let Me Go, but then spends more time on Karl Marx and his definitions of capital extraction. The book also commissioned a series of new fictional pieces. These are not so much short stories as speculative fictions such as made-up histories or reports. With one or two exceptions, these would fall under ‘noble failures’ in my opinion – definitely worth a try, but mainly curiosities. I’m also slightly puzzled by Tim Jackson’s contribution, which is a reflection on sailing with his children on the Norfolk Broads. Charming and insightful though it is, his interpretation of the brief is… generous, shall we say.

I was surprised that there’s only one passing mention of Ayn Rand, the favourite writer of Donald Trump, Rex Tillerson, Paul Ryan and many other figures now running America. (In Britain, see former business secretary Sajid Javid MP and Brexit architect Daniel Hannan.) I presume this is because the editor decided her work didn’t fully qualify as science fiction, but if you can stretch the concept to include sailing in Norfolk, you can stretch it for Atlas Shrugged.

The book is pitched at an academic audience, which is a bit of a shame, as I think there’s a wider readership for something like this. But if you can locate yourself in the Venn diagram of people interested in economics and in SF, then look out for this in your local library.