Reading Barbara Finamore’s book on China recently, I heard the story of the Agenda 21* building in Beijing, which she helped to coordinate. In the 1990s, there were no green buildings in the whole of China. The National Resources Defence Council oversaw the construction of a demonstration building, with the Chinese government providing the land and the US government funding the building. It opened in 2004, and was the first LEED Gold certified building in China. 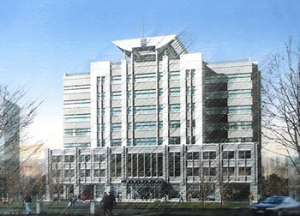 As a demonstration building, its energy performance was modeled beforehand and then carefully monitored to show the kinds of gains that were possible. It used 72% less energy and 40% less water, which apparently caused some suspicions: “Convinced that something was amiss,” Finamore writes, “the local government installed cages around the bulding meters to prevent tampering, but the dramatic results continued.”

The nine storey building has solar PV and solar hot water, is well insulated and oriented to use natural light. Windows are recessed to reduce solar gain, with ‘light shelves’ that bring more light into the building. It does still need a cooling system, which works by making ice at night when electricity is cheap, and then circulating it through the building by day.

What I liked about this example isn’t so much the building itself, but its role in proving energy-efficient construction techniques. It’s a story that’s repeated all over the world, at the local level as well as the national. I was talking to a developer recently who wants to set a benchmark green development in Luton. Show what’s possible, and you can raise expectations and raise standards. If planning authorities can see that good buildings don’t have to be vastly more expensive, they might start turning down inferior designs. Everyone has to raise their game, local builders skill up, and new possibilities emerge. See Exeter City Council, which built a trial Passivhaus, proved it worked and now every new council building has to meet the standard.

Almost 15 years on from the Agenda 21 building, China’s latest 5-year plan calls for 50% of urban buildings to be certified green. It is now the second biggest market for LEED certification after the US. Whole new towns and cities are being built to high efficiency standards. Green building techniques have been widely adopted, with plans for accelerating them further. Half of all global construction projects are in China, and at that kind of scale, China’s drive for greener buildings will bring down prices for everyone. Powerful things, demonstration projects.

*I know that the presence of Agenda 21 in this post will bring the conspiracy theorists out, by the way. If you see a new world order plot in Agenda 21, you probably haven’t understood the UN.