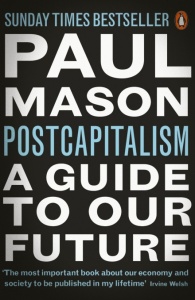 Every time I go into a bookshop, I see this book blinking at me from the shelves: Postcapitalism – A Guide to our Future, by Paul Mason, a writer and former economics editor for Channel 4 News. I probably ought to read that at some point, I tell myself, before picking up something else. But here we are. I’m doing a bit of reading on the future of capitalism, and this one’s on the list.

Capitalism has proved remarkably adaptable over the decades, Mason explains. To the disappointment of Marxists everywhere, it has stubbornly refused to collapse under its own contradictions. Instead it morphs and shifts, riding waves of new technology to expand. It’s moved in roughly 50 years cycles, long expansions followed by periods of instability that underlie the more familiar business cycle. A reading of history would suggest that we’re due for a new upswing, but Mason argues that the cycle may be broken – the world is different now, and capitalism faces an existential crisis.

The culprit is information technology, which has “disrupted the basic institutions of capitalism: price, ownership and wages”. The system doesn’t know quite what to do with digital products that don’t cost anything to produce and replicate. It’s difficult to measure the value of something which is provided for free, such as Facebook, and instead generates its value through information. And then what about bloggers or podcasters or Wikipedia editors who are willing to work for free? Economics is based on the idea of scarce resources, but in a digital world many things are abundant. Supply and demand don’t work with zero marginal cost products. The power of networks and information technologies are fundamentally at odds with the institutions of the economy, and Mason wonders if “capitalism is a complex, adaptive system which has reached the limits of its capacity to adapt.”

Perhaps capitalism could ride out these disruptions if it weren’t for the series of giant challenges coming: climate change, demographic change and resource depletion, as well as more technological developments in automation and AI. The combination of internal fractures and external shocks make the future highly uncertain.

Mason is far from alone in identifying these cracks. There are a dozen books saying similar things, from a variety of perspectives. There’s a sense that things are shifting. Some writers want to save capitalism, others are cheerleading for its demise. For Mason, your actual feelings about capitalism are a moot point. “An economy based on information, with its tendency to zero-cost products and weak property rights, cannot be a capitalist economy.”

So what does Postcapitalism look like? The book doesn’t offer much detail, but Mason sees a more transparent, more democratic economy. It’s decentralised and often peer-to-peer. The state is a facilitator, not a planner. Businesses are collaborative. There’s a basic income, and shorter working hours. These too are recurring themes.

There’s a lot that’s interesting here, and quite a lot of overlap with my own forthcoming book. What I found frustrating about Postcapitalism is that it spends so much time detailing Marxist theory and what it got right or wrong. Or explaining the evolution of long wave theories of the economy, and all the economists who refuted or refined the idea over time. I see the point of theory, but it’s a bit of a slog.

It also means that it’s a book about the future that is often argued in the terms of the past – left and right, capitalists and Marxists, proletariat and the bourgeoisie. For someone like me who started paying attention to politics in the late 90s, it seems a bit outdated and unnecessary. But I suppose if you spent decades on the traditional left and think in its categories, the book could be very powerful – and a strong argument for updating some assumptions. Capitalism may not collapse on its own. The working classes aren’t going to rise up. The future doesn’t look like the ideals of the past. But perhaps it may yet be transformed by “something more dynamic that exists, at first, almost unseen within the old system, but that breaks through, reshaping the economy around new values, behaviours and norms.”