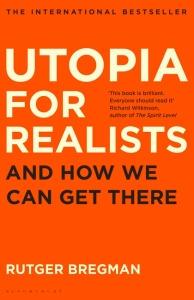 First published in Dutch in 2014, Utopia for Realists – and how we can get there has been reprinted in 23 languages and is a solid bestseller. There is, it would appear, a real appetite for utopian thinking.

“Modern progress has trumped the wildest imaginings of our ancestors” writes Bregman, but ideas about the future have stalled. Politics is on the defensive, while inequality and environmental decline threaten what we already have. It’s time to use our imaginations again, and Bregman’s book sets out a series of big visions. Some of them look unlikely from here, but as he reminds us several times, utopian dreams of the past are taken for granted now – such as democracy, the end of slavery or the welfare state.

Some of the big ideas covered are quite familiar. There’s a lot of energy around the Basic Income at the moment, from all sorts of different quarters. A basic income is “what capitalism ought to have been striving for all along” in Bregman’s view. “See it as a dividend on progress, made possible by the blood, sweat and tears of past generations.” He writes about the possibilities of ending poverty, a shorter working week and new measures of progress. Given current attitudes, the most radical chapter is the one on opening borders and allowing more immigration. He describes borders as “the single biggest cause of discrimination in all of world history,” and while some readers will part company with him on this one, his arguments are almost entirely absent from immigration discourse and are well worth reading.

Utopia for Realists is a title that neatly describes the delicate balancing act that Bregman is attempting. This isn’t an exercise in speculative fiction, as the original Utopia was. Neither is it naive idealism or  It’s well researched and presents evidence for every idea, showing why it would work and why it’s better than other options. There’s a moral case and a business case for every proposal here. It’s ambitious and visionary, but rational and patient, drawing as much on history and psychology as economics or politics.

Bregman also has an eye for the historical anecdote. I’ve read thousands of pages on the basic income, but hadn’t ever heard the story of England’s early flirtation with it in 1795 in the Speenhamland projects. Or how that story had influenced Nixon and ultimately sank his proposals for it in the United States many generations later.

Bregman introduces his ideas in a conversational style, with a clarity and enthusiasm that goes some way to explaining why it’s been so popular. Just as important is that it’s full of belief and possibility. It should be an inspiration to anyone who wants to change things. He rebukes the ‘underdog socialists’ with their narrative of loss. They “will have to stop wallowing in their moral superiority and outdated ideas” he says. “Everyone who reckons themselves progressive should be a beacon of not just energy but ideas, not only indignation but hope, and equal parts ethics and hard sell.”