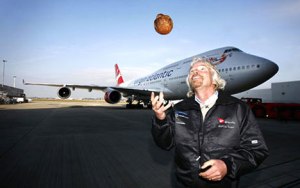 “Today marks a biofuel breakthrough for the whole airline industry… Virgin Atlantic, and its partners, are proving that you can find an alternative to traditional jet fuel and fly a plane on new technology, such as sustainable biofuel.”

That was Richard Branson, posing with a coconut next to a plane that had just flown from London to Amsterdam using biofuels made from nuts. Sort of: the fuel mix was 5% biofuels and 95% normal jet fuel. That was in 2008. 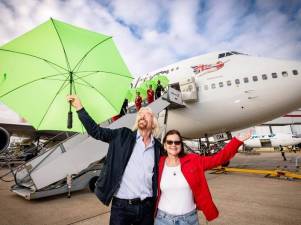 “Long haul travel is more important than ever for connecting people around the world and it’s our responsibility to ensure we’re doing that in the most sustainable way possible… That’s why we’re excited to showcase this fuel on its first commercial flight as we plan for the world’s first full scale jet fuel plant using this amazing new technology.”

That was Richard Branson, posing with a green umbrella next to a plane that had just flown from Orlando to London using fuels made from waste industrial gases. Sort of: the fuel mix was 5% ethanol and 95% normal jet fuel. That was 2018.

Let’s not be cynical. There are positives to take from the juxtaposition of these two stories. For one thing, the quality of photography on the internet has improved dramatically since 2008. Virgin Atlantic are still trying to make flying greener. And Richard Branson hasn’t aged a day. In fact he may actually be getting younger.

The negatives? The expected breakthrough on sustainable jet fuels has not materialised. Virgin Atlantic is still getting PR attention with incremental improvements, and one has to wonder where all the other airlines are on alternative fuels. And Richard Branson hasn’t aged a day. In fact he may actually be getting younger.

Sure, it’s great to see the Lanzatech fuel in use here, and giving it a high profile PR moment might encourage investment. But it won’t be able to manufacture enough for Virgin to use it at scale until 2025, and that’s just one airline. And it’s that long delay that is ultimately the problem. There are things that could make aviation much more sustainable, including advanced biofuels, new types of jet engine, and even electric propulsion. Since aviation continues to expand, progress on almost all of them is too slow to make a difference to falling emissions now.

Ultimately the problem facing the aviation industry is not technology, but urgency. We don’t have another ten years to wait for sustainable flying. The longer we wait for a global peak in emissions, the harder it will be to keep warming within 2 degrees. The IPCC said in 2007 that emissions had to peak by 2015, which they haven’t done. The Met Office says 2020 at the very latest, at which point ‘very hard’ essentially turns to ‘impossible’.

Given the slow progress, we can’t leave it to the industry. We can support the new technologies with public money, as Branson is requesting, but there should be stick as well as carrot – perhaps penalties for exceeding a certain efficiency rate. We can consider other measures such as a frequent flyer levy, and banning first class travel to make better use of each plane in the air. We should be saying no to airport expansion plans, especially Heathrow. It is of course necessary for some of us at times, but we all need to think long and hard before we get on a plane.

The simple reality is that despite the twirling of green umbrellas, there’s still no way for the world to keep flying and stop climate change.