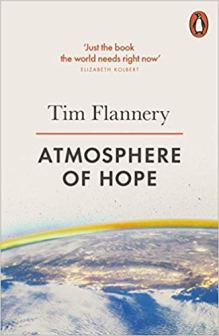 With The Uninhabitable Earth on my reading list, I decided I ought to read something more optimistic afterwards. Browsing the climate change section in Blackwells in Edinburgh, this title jumped out as a likely contender – something informed and hopeful.

If you haven’t come across him before, Tim Flannery is an Australian scientist and explorer. He wrote a bestselling book on climate change, The Weather Makers, in 2005. It was a very influential book, explaining the topic in accessible terms for a non-scientific audience. A number of politicians and campaigners cite the book as the one that first put the climate on their agenda.

Ten years on, Tim Flannery looks back at the book. What did it get right? How have things changed? As you might expect, the ground has shifted substantially, and the book brings the science up to date through chapters on sea level rise, ocean acidification, and other effects. As summaries of climate science go, this is very good.

The second part of the book addresses the obstacles to a safe climate, looking in turn at coal, oil and gas, divestment, renewable energy and sustainable transport. Flannery is interested in shifts over the last decade, which include the gradual tilt towards renewable energy, but also the power politics of the energy incumbency. This is particularly pronounced in Australia. In the gap between his two books, Flannery was appointed head of the Climate Change Commission, and then fired when the Abbott government abolished it – along with the country’s carbon tax and its Department of Climate Change and Energy Efficiency. It’s strange to remember just how recently, and how briefly, Australia was a leading light on climate action.

Recognising that easy solutions are no longer enough, the third part of the book turns to bigger scale answers. It’s now clear that we can’t get to a sustainable footing just by cutting emissions; we need to remove CO2 from the atmosphere as well. Flannery highlights what he calls ‘third way’ technologies that lie between simply adapting to a changed world on the one hand, or attempting to geo-engineer a new world on the other. Those technologies include rock weathering, CO2-based plastics, seaweed farming and several others. They’re all things that don’t really get enough attention in the climate debate, and the chapters here introduce them well.

Atmosphere of Hope is by no means comprehensive – there’s little on food and agriculture, lifestyle and consumerism, or buildings and efficiency. There’s nothing on transport beyond electric cars, and it would be easy to read the book and think that most of the solutions are technological. Perhaps the biggest problem is the speed of change itself. Much has changed since The Weather Makers, but the last three years since this book’s publication have packed a lot in too. The book was written just before the Paris Agreement, and of course before America trumped all over it. Writing now, Atmosphere of Hope might be a harder title to justify.