Last year I wrote about a German company that was encouraging people to keep bees as pets. A reader pointed me to a similar project in Britain. Masonbees.co.uk run a ‘bee guardian’ scheme, where you are sent red mason bee cocoons in the spring. They hatch in the garden, breed, and then you return the nesting tubes in the autumn. They can be checked for disease or parasites, numbers and health can be monitored, and then fresh cocoons are sent out the following year. 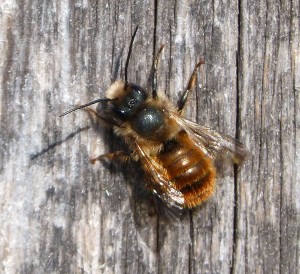 It sounded like a great way to support solitary bees and ensure pollination of my fruit trees, so we signed up. I took delivery of a nesting box full of cardboard tubes, and waited for the spring. In march a jiffy bag with a handful of little bean-shaped cocoons arrived in the post. I began putting them out each day in the garden and bringing them in again at night, following the instructions for uncubating the bees and hoping to time their release with the emerging blossom. Slowly, a few at a time as the days got warmer, the bees hatched and flew. Just three slowcoaches remain, and perhaps they won’t hatch now.

We are now sharing the garden with a small population of furry ginger bees. They are all over the fruit trees and the spring flowers. They have found the nesting tubes and we see them coming and going. The nesting box comes with an observation drawer, and you can watch them scooting backwards into it, covered in pollen. There are already little nests with mud walls – hence the name mason bee – and stores of food for the larvae. Tiny grubs that look like grains of rice are growing inside.

So far, keeping mason bees has been a joy. They are gentle enough that my six year old daughter found one in the living room this morning and picked it up with her bare hands to take it back outside. (I haven’t encouraged this, as mason bees do have a sting. It’s just mild and they don’t use it often.)

While not endangered, wild bees are in decline in Britain. Keeping a few of them in the garden won’t change that, and cleaning and shipping cocoons is obviously an unnatural intervention in the process. But keeping the bees has been fun, it’s made me and my family more aware of bee activity in my area, and my garden and my neighbours’ will benefit from the pollination.

If you’d like to join it next year, you can find our more about the Bee Guardian scheme here.