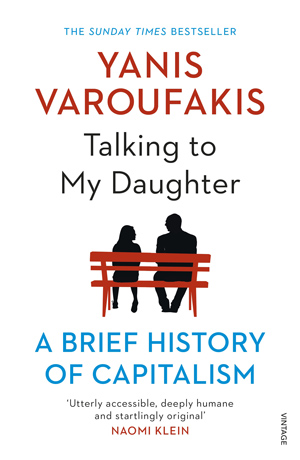 Yanis Varoufakis is an economist, university professor and politician, best known for his brief stint as Greek finance minister during the troubled early months of the Syriza government. This book was written before those events, and was a bestseller in a number of languages before getting an English translation. It’s less academic and more personal than his other books, with no references or technical language.

That’s because, as the name suggests, it’s written to his fifteen year old daughter. “As a teacher of economics,” he explains in the prologue, “I have always believed that if you are not able to explain the economy in a language young people can understand then, quite simply, you are clueless yourself.” The book explains the origins of trade, money, debt and free market societies as a grand emerging story. There are only passing mentions of key economists and thinkers, and few detailed historical examples. Despite the subtitle of the book as ‘a brief history of capitalism’, the words capital and capitalism aren’t used.

Instead, Varoufakis explains things through stories and thought experiments. It’s imaginative, drawing on experiences from his daughter’s life, Greek myths and sci-fi films. A chapter on currency is based on how cigarettes were traded at a prisoner of war camp, and includes some of the most straightforward explanations of inflation and deflation that I’ve come across. The Matrix features prominently, serving to book end some thoughts on automation and control of machines.

The book does a particularly good job of explaining the deep roots of inequality, and why some parts of the world remain poor. It effectively demonstrates how money is always political. And it’s refreshing to see an economist talk so openly about the limits of his profession: “We can keep pretending we are scientists, like astrologists do, or admit that we are more like philosophers, who will never know the meaning of life for sure, no matter how wisely and rationally they argue.”

With any book aiming for the broad sweep of economic history, there’s a risk of generalising and over-simplifying. There are always exceptions and caveats that will get glossed over. Some will dislike the way Varoufakis has left out political categories and ‘isms’, and will want to stick them back on. Others, myself included, will appreciate the fact that the story is told without burdening it with obsolete political dualisms.

If you are confused by economic ideas, or feel like there are key concepts that you don’t quite understand, this is a book for you. “When normal people hear or read economists” Varoufakis writes, “they tend to draw this conclusion: The economy is too technical and boring to bother. I should leave it to the experts. Except the truth is that there are no real experts, and the economy is too important to leave it to the economists.”