Here’s a striking graphic from Bloomberg’s New Energy Outlook. It shows the cheapest form of energy in a series of countries, in 2014 and today. A lot can change in five years. 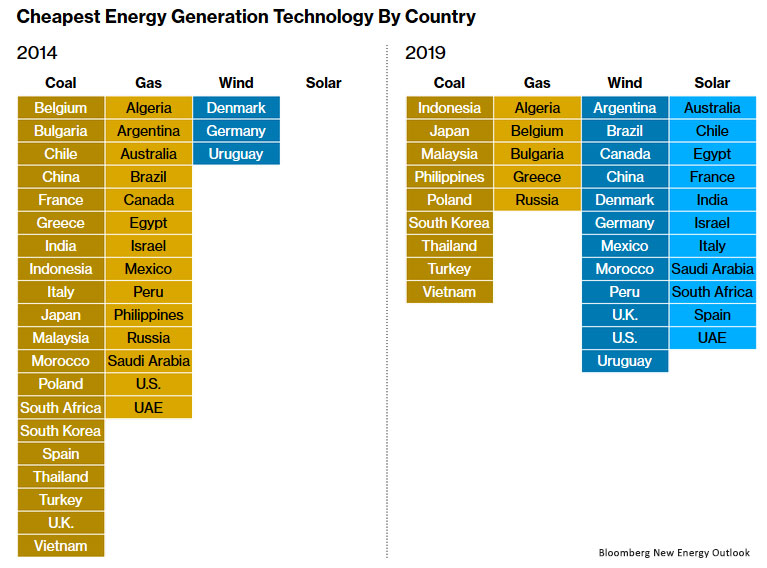 This won’t be a surprise to many – here’s what I wrote about approaching ‘grid parity’ in 2014. Renewable energy is now cheaper than coal and gas in a whole string of countries, including some of the places where we are going to see the biggest rises in new energy infrastructure: China, India, Brazil.

Coal is still cheaper elsewhere, especially in countries that have their own supply, such as Poland or Indonesia. It will be harder to decarbonise energy there, but in many places the cheapest and therefore most obvious option is renewable energy. Coal might be used for other purposes – China is gasifying it or using it for chemicals, for example. Or coal might hang on because of political lobbying or the value of coal mining jobs. Still, the economics of rising fossil fuel prices and falling costs of renewable energy are working in favour of the transition.

Britain is a case in point. It’s easy to forget this now, but in 2014 coal was the main source of electricity in Britain. At just over 40%, coal was generating more power than gas. Its collapse had started by the end of the year, with record reductions in CO2 emissions in 2016 and 2017. Today coal power is almost gone from the energy mix, and we just have to decarbonise … well, everything else.

Will we see a similar transformation in other places? The energy landscape has shifted, and it is entirely possible. Will they happen in time? We’ll have to see.