One of the founding inspirations for this blog is the Living Planet Index, produced every two years by WWF. They’ve been publishing their health-check on the world’s wildlife since 1998. I read it for the first time in 2006, and understood for the first time what a global decline in biodiversity means.

Looking back, it’s kind of embarassing to me that I didn’t understand this until my twenties. But as a child, almost everything I read about wildlife decline was framed around extinction. That tends to put individual species in the spotlight, often in a very local context. Living in Madagascar, I knew very well how species could be threatened, what habitat loss looked like, and how deforestation and erosion can destroy a landscape. What I hadn’t seen was the global perspective.

The Living Planet Index aggregated the figures across the world, and shows the decline overall. It tracks the abundance of wild nature rather than extinctions, and what the trend show is impoverishment. Since 1970, wildlife abundance has declined by 68%. 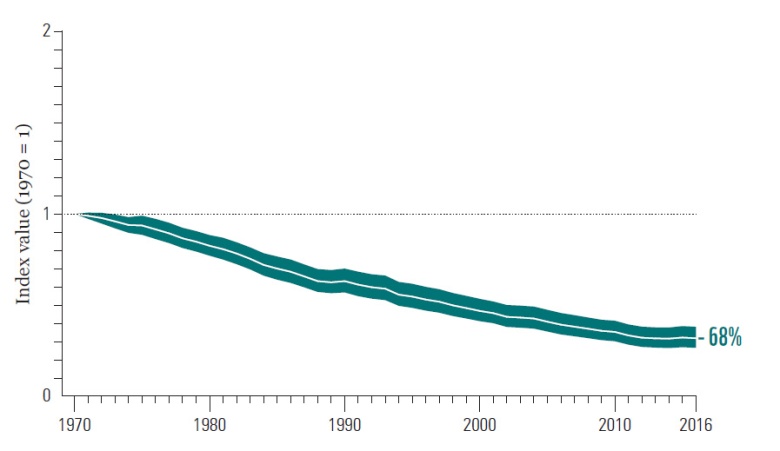 This is the price of human expansion – in numbers and most importantly in what the richest take from the natural world. The world is less vibrant, less alive, less diverse, less colourful. And we have no excuses – 20 years of warnings in this report alone haven’t led to any kind of reassessment.

This is why people like me who read the Living Planet Index in 2006 and started writing a blog might find that it’s not enough. They might go part-time and then quit their job entirely to give their writing more time. They might start supporting groups like Extinction Rebellion, looking for people who aren’t prepared to shrug off the catastrophic destruction of the world’s living systems. Because at some point, we have to turn a corner. If it isn’t now, at 68%, when is it? How much more dies before the change begins? How much more do we kill?

You can download the whole report here. As always, it is beautifully presented and full of useful information. This year it is accompanied by an essay collection called Voices for a Living Planet, some new modeling tools from a project called the Bending the Curve Initiative, and this video.