Since reading the crazy statistic that 61% of Britons don’t think they earn enough to meet their basic needs, I’ve been curious to know exactly what a real figure would be. A base rate, an ‘enough’ for living in the UK. I’ve come across a couple, and this week the Joseph Rowntree foundation have announced a new one – £13,400.

Working on solving poverty in the UK, the foundation wanted to ascertain the costs of a decent standard of living, so they could compare it to current welfare allowances. The sum they have come back with amounts to £210 per week for a single person, £626 for a couple with two children. See the table below for the breakdown of where that goes. 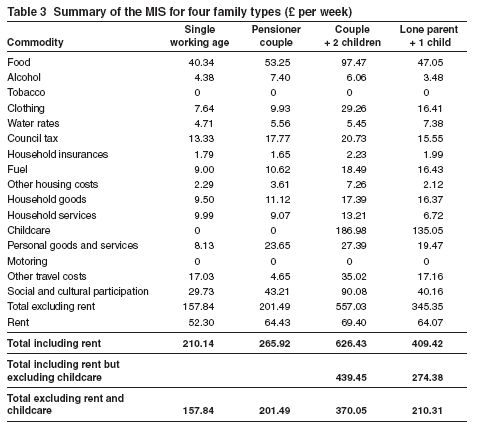 Those on state benefits receive about two thirds of what they need, the report concludes. The basic state pension gives you about three quarters.

The two other figures I’ve picked up for ‘enough‘ are higher, at £355 a week and £300, but of course everyone is going to have their own benchmark. Despite the ‘how long is a piece of string’ nature of the question, I think it’s something we all need to think about, for a variety of reasons. The great lie of the consumer culture is that you need more, more stuff, more experiences, and to pay for those you need to earn more. It’s very easy to get sucked into a lifestyle where you’re working flat out to keep up with the ‘needs’ you’ve created for yourself. Or, like the report I mentioned at the beginning, you may even convince yourself that you don’t earn enough. Since that is actually highly unlikely, that’s an ungrateful way to live. It’s that kind of attitude that makes it so difficult to encourage people to scale back their consumption, or to buy ethically, to resist the cheap exploitative deals – if we think we’re missing out, that the world is somehow short changing us, we won’t ever make sacrifices for anyone else.

Finding your ‘enough’, and sticking to it, is actually a very liberating thing. It stops that endless worry that we’re not quite at the level we should be at. It gets us off the treadmill of up-scaling wants. It allows us to be generous with the remainder.