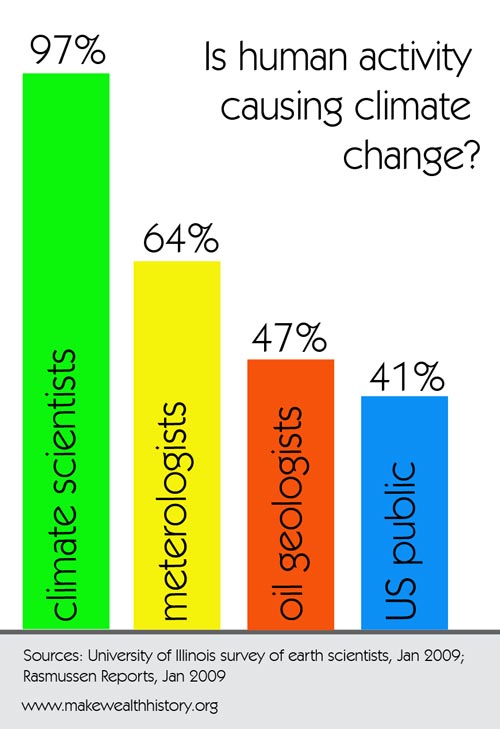 The climate change debate has been shunted into a whole variety of tangents, but one of the most pointless is the debate over whether or not the debate is over – is there a consensus or not?

The IPCC process, while not perfect, was the one of broadest and most thorough reviews in the history of science. The Royal Society and the US Academy of Sciences have conducted their own reviews and agree.  Science Magazine conducted a survey of published papers, and out of 928 peer-reviewed papers on climate change between 1993 and 2003 there wasn’t a single one that disagreed with the IPCC’s opinion.

And that’s what it comes down to: where exactly are we looking for the consensus? Obviously there are dissenters and people with alternative theories. Ultimately though, what matters is a consensus among the people most likely to know and understand the science. You can forget the bloggers, question the journalists and take the politicians’ opinions with a pinch of salt, but what do the scientists say? More specifically, what do the earth scientists say? And within that group, what to those who study the climate think?

Here are the results of a survey of earth scientists that the University of Illinois in Chicago released this week. Climate change scientists are almost totally in agreement that human activity is producing global warming. Meterologists are less sure, but there is still a majority opinion. There isn’t a consensus among petroleum geologists, but considering their jobs are at risk if climate change is happening and questioning it is in their interests, 47% is pretty high. Across all earth scientists, 90% agreed there had been a temperature rise, and 82% agreed that human activity was a ‘significant factor’.

Given this, why on earth isn’t there a consensus among the public? Why do we think we know better than the scientists?