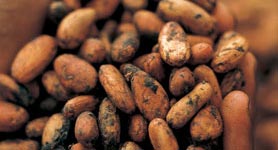 This weekend I noticed another story about speculation in commodities, this time in cocoa. Since the commodity markets don’t get nearly enough attention, or enough outrage in my opinion, I’ve posted this story alongside an earlier one that explains how commodity markets work.

The latest speculation debacle is in the cocoa market, where the prices of cocoa have soared by 150% in the last year and a half. This is partly because of a crop failure in the world’s largest producer, Ivory Coast. The threat of a shortage was then exacerbated by an unknown speculator buying hundreds of millions of pounds worth of futures contracts, essentially betting that there wouldn’t be enough to go around. Sure enough, the price has of cocoa risen to a 30 year high of £2,950 a tonne. For chocolatiers and confectioners, people who actually need to buy the stuff, this is a serious blow to their profit margins.

To buy something you don’t want in order to boost the price so that you can sell it on to those who need it is an abuse of the market. It’s remarkable that it’s legal, and of course this is just chocolate. When the same thing happens with corn or rice, the result is starvation. Speculation on commodities is one of the most obvious ways in which financial services are profitable, but hugely destructive to other business. It’s an unproductive business that destroys productive ones.

A confederation of cocoa buyers has taken the rare step of writing to the London International Financial Futures Exchange to complain about the state of the cocoa market. If the speculation continues at the expense of those who need the markets to run their businesses, they will leave London altogether. “From the moment a market becomes purely a vehicle for speculation,” they write, “it loses its usefulness.”

There is an urgent need to address unproductive speculation in essential commodities, particularly staple foods, and of course oil. It’s a dog-in-the-manger investment model that will only prove to be more destructive as global demand for resources rises, especially if oil and metals and other resource stocks begin to decline.