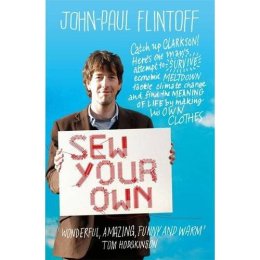 A year after starting our house renovation project, we’re at the soft furnishings stage and recently got some quotes for curtains. I find myself wishing I had paid more attention in sewing classes at school. It’s a recurring thought – that sewing is something that I really ought to be able to do, especially since I decided not to buy sweatshop clothes any more.

That’s a frustration that John Paul Flintoff shares, only he’s done something about it, and recorded it all in this rather excellent book. “I have become increasingly frustrated by my dependence on other people to do the simplest things,” he says, and the book recounts his experiences in such things as rat-catching, putting up shelves, and as the title suggests, making his own clothes.

Being able to clothe yourself is second only to food in providing for yourself. There’s nothing quite like growing your own food for reclaiming the power from our consumer culture, so why not sewing too? Especially since if you can’t vouch for where it came from, an item of clothing was probably made with exploitative labour in a distant part of the world – “it’s impossible to get something cheap without someone, or something, being exploited.”

However, Sew Your Own is not really a book about making your own clothes. It’s much broader than that, and something of a journey. At first, I feared it might turn out to be one of those gimmicky books where the writer takes on some bizarre and unnecessary life quest for the sole purpose of writing about it later (Around Ireland with a Fridge, Are You Dave Gorman, etc) Despite name-checking several such books, it doesn’t quite go that way. Instead, Flintoff recounts various experiences and encounters that have shaped his thinking. It reminded me of Gary Paul Nabhan’s Coming Home to Eat, or Utopian Dreams by Tobias Jones, which explore local food and community living respectively.

Chapters are short and range freely. In early episodes Flintoff orders hand-made tailored suits, and meets sweatshop workers in New York of all places. There’s “A depressing chapter, in which the author gets worried about peak oil, mass starvation and suchlike”, to give you its actual title. He investigates politics, reflects on permaculture and art. As a journalist, he also meets a lot of people, and tries various things out. He spends a day working as a bin man, interviews Jeremy Clarkson. There’s also an unexpected spiritual side to proceedings, as Flintoff visits churches and reads books on Buddhism.

Each chapter adds a little more to the picture, which adds up something resembling a philosophy of self-empowerment through DIY. (See Matthew Crawford’s The Case for Working with your Hands)  We need to learn to be more self-reliant as a response to climate change and peak oil. Taking responsibility for making things ourselves means fewer people are exploited along the supply chain. It’s also fun, a form of expression, and radically subversive. As Flintoff reminds us, Gandhi believed that if India began making its own cloth it would break the British cotton monopoly and achieve independence. He wore clothes he had made himself and took his spinning wheel to meetings, being the change he wanted to see. India’s flag has a spinning wheel on it to this day.

Besides, making your own clothes isn’t really so odd. “The act of making clothes is its own reward – an outlet for creativity and empowerment that used to be enjoyed by every person on the planet.” Perhaps it’s only a matter of time before we’re all knitting on the bus.