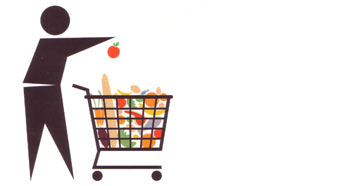 The food crisis, which was back in the news again last week, may not be quite what you expected. Global agricultural systems are struggling to feed all seven billion of us, but the biggest problem isn’t yields or climate change, and it may not be biofuels or speculation or rising meat consumption, although all of those are factors. The biggest problem may actually be waste.

That’s Tristram Stuart‘s argument. In the UK, we throw away a third of the food that we buy, and that’s just household waste. More is thrown away by the supermarkets, the suppliers, the manufacturers, or never even harvested. The picture is the same across the western world, and if you add up all our waste, you get a startling fact: the waste from the US and the EU “would be enough food to satisfy the needs of all the world’s hungry between three and seven times over.”

A billion people are going hungry, and we throw away enough to feed every single one of them and more. That’s a pretty damning fact, and it’s easy to see why many people are reluctant to make any link between our waste and hunger elsewhere. But in a global food system, the link is unavoidable. “By buying more food than we are going to eat, the industrialized world devours land and resources that could otherwise be used to feed the world’s poor.” Everyone has to ‘compete’ for global grain harvests. If we buy grain, it’s now off the market and unavailable for someone else, even if we throw it away. The more we buy, the more demand we create and the higher prices will become. If we’re buying sufficient quantities of food on the global markets to be able to throw a third of it away, our demand for a surplus may well price others out of just having enough to eat.

Stuart doesn’t soft-pedal this in any way. “In that all of us in the affluent world deprive others of food necessary for survival,” he writes, “it is difficult to escape from the conclusion that in this remote, indirect and ignorance-muffled way, I , you, and everyone you know behave murderously towards fellow humans.”

So how did we end up with this situation? Stuart moves through the supply chain, starting with consumers, who often misunderstand ‘sell-by dates’ and ‘use-by dates’, and who are generally unaware of how much they throw away. Between us we throw away 4.1 million tonnes of food that could have been eaten. Stuart then moves on to the supermarkets, each of which can throw away enough to feed 100 people a day. Apparently the supermarkets believe that shoppers don’t like to see empty shelves, so they routinely buy in more than they need. Since the sale price is two or three times higher than the actual value, it’s cheaper to overstock and throw away than to lose sales by selling out. The supermarkets dispose of around 367,000 tonnes of food a year.

The supermarkets are implicated in the rest of the supply chain, through their awkward demands. They may order 20,000 ready meals from a supplier for example, but then change their minds on the day of delivery and only take 15,000. They offer no compensation for this, and often don’t permit the supplier to re-sell the goods or give them away free – it would dilute the brand. This is particularly a problem with ‘own brand’ supermarket foods. If a supermarket changes its mind on a delivery of a well known brand, it can easily be sold to someone else. If it’s an own-brand line, it just has to be thrown away. Behaviour like this, and much more besides, leads the food sector to waste 4.1 million tonnes of food annually.

The supermarkets rear their ugly heads again on the farms. They’re the ones deciding whether vegetables are fit to be sold, and turning down potatoes for having too many eyes. There are some EU ‘cosmetic standards’ – it is illegal to sell a forked carrot in the EU, for example. (Most of the carrots I’ve grown this year wouldn’t fit the EU’s legal definition of the vegetable, I realise) Mostly though, it is the supermarket standards that lead to between a third and half of vegetables grown for them ending up wasted. British farms produce a million tonnes of waste potatoes a year. 58% of carrots grown in the UK go to waste, meaning that “for every carrot you eat, you have paid for at least one more to be thrown away.”

All of this heaps shame on the way we feed ourselves in the affluent west, but actually waste is a problem elsewhere too. Stuart shows how grain is wasted in post-harvest losses across the developing world, through poor storage or inadequate transport facilities. Using crates instead of sacks, for example, can prevent wastage in a crop of mangoes on its way to market. Lack of silos or poor warehousing means crops are lost even in countries that have large numbers of malnourished citizens.

The problem then, is a large one. Fortunately, there are solutions, and Stuart summarises them as ‘reduce, redistribute, recycle’. Raising taxes on landfill and demanding transparency can reduce the amount we throw away. Unsold food can be given away through food banks, something that is common in the US, but not in the UK. Recycling can be done by anerobic digestion, composting, or most importantly by feeding pigs on swill, illogically banned in Britain since 2001 as a panic response to food-and-mouth.

Stuart rightly describes our food waste as a global scandal in the title. This is a book that made me very angry, much like the last book I read on food, Enough. It presents us with some major challenges, and it certainly forced me to think again about where our food comes from and how we use it. It’s also a book with an unusual integrity. Stuart kept pigs as a teenager and fed them on waste from various companies around the town. He’s a dedicated ‘freegan’ – he knows how much supermarkets throw away because he’s been through their bins and helped himself. His campaigns to raise awareness of food waste include serving a free meal to 5,000 people in Trafalgar Square last year, all from food that would otherwise have been wasted. The book is detailed and well researched (there are 150 pages of notes at the end) , but it’s also written with a passion for justice and a love of food – and if you care about either of those things, this is a book you should read.