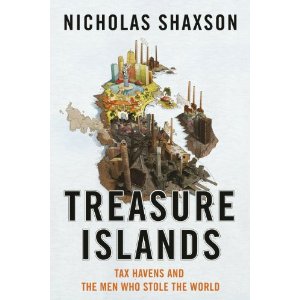 Last week I described how vulture funds had been banned in the UK, but allowed to continue in our offshore territories. A similar story looks likely with the new Bribery Bill. The new law will tighten up the bribery guidelines, but leaves large loopholes that mean businesses will not be responsible for bribes paid through a third party. Step up offshore tax havens, as bribery brokers.

Treasure Islands: Tax havens and the men who stole the world is the best book I’ve read so far this year. It explains a shadow financial system that is almost unknown to most of us, politicians included, but that now processes over half of the world’s trade. Over half of the world’s banking assets are held offshore, and a third of foreign direct investment. We can’t be sure how big it is, because nobody has been tracking it. In fact, not tracking it is the whole point.

‘Offshore’ is a tricky term, generally used of Carribean islands or small island territories like Jersey or the US Virgin Islands. The system is broader than that however, and includes the City of London, Delaware, or Switzerland, all of which are geographically onshore, but are tax havens in the way they function. Shaxson expands and simplifies with a definition of a tax haven as “a place that seeks to attract business by offering politically stable facilities to help people or entities get around the rules, laws and regulations of jurisdictions elsewhere.”

Mostly, tax havens are about secrecy, and are often described as ‘secrecy jurisdictions’. Register your business here, and you won’t have to declare who owns it, where the profits were made or who gets them, and a thousand other little tricks and tips to maximise profits and minimise tax. It’s tempting to see this as ‘sticking it to the man’. Nobody likes paying taxes after all, but tax havens essentially undermine other countries as a way of life, and plenty more besides. They are places for mafia and drug money, they hide bad accountancy and create instability, they provide escape routes for plundering elites in developing countries, and a place for dictators to stash their looted billions. Most commonly, they’re just there to hide accountancy trails and complicate international money movements, frustrating regulators and avoiding taxation.

The problem with tax havens is that they drive a race to the bottom. One place cuts business tax, and everywhere else has to do likewise to stay competitive. Another makes it easier to register a new company, or says that directors no longer need to be named, or creates a new law against breaking bank secrecy. Other countries have to follow suit, or lose business. The result is ever weaker regulation and lower standards, and it is that sort of minimal oversight that up-ended the financial system in 2007.

To give just one specific example, Ireland’s regulator had a promise with the banks that if they filed the paperwork for a new derivative by 3pm, it would be authorised for trade the following day. As Shaxson says, alternative investments are complex and the paperwork could run to hundreds of pages. There was no way the regulator was able to read the file and sign it off responsibly. It just wanted speed, and the promise of speed meant that more banks would launch derivatives out of Ireland instead of the many other places it could be done. So derivatives were released onto the market without proper oversight, and we all know how that turned out.

Treasure Islands begins with the history of how the tax havens came about. The Swiss have been at the secrecy game for centuries, partly so that Protestant kings could borrow from Catholics without their people getting upset. The modern secrecy network dates from the end of the British empire. Shaxson argues that as Britain realised its empire was crumbling, it switched tactics so that while it lost the geographical territory, it kept the money. It built a spider’s web of tax havens across the Carribean or Hong Kong, an inner ring including Jersey and Guernsey, with London at the centre. As the book suggests, “colonialism left through the front door, and came back in through a side window.”

Later chapters describe life in a tax haven, and how finance works with small places where all the relevant people can be gathered in one room, and how democracy is undermined by the need to protect the offshore business. There’s a chapter on developing countries, where the outflow of illegal funds vastly outweighs the inflow of aid. There’s a dozen blog posts in all this. Perhaps I’ll get round to a couple of them.

Finally, Shaxson argues for how to begin undoing the worst of the damage, with greater transparency, international cooperation, and corporate responsibility. It’s time to get informed about it too, and make some noise. (Groups like UK Uncut are on the case). Because “whoever you are, wherever you live, and whatever you do, this affects you” as Shaxson concludes. “Offshore is undermining your elected government, hollowing out its tax base and corrupting politicians. It is sustaining a vast criminal economy and creating a new, unaccountable aristocracy of corporate and financial power.”