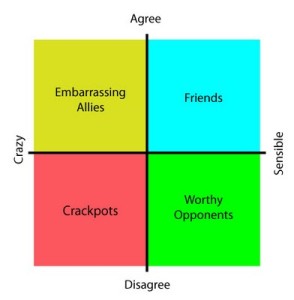 Okay, in the light of the recent flurry of commenting, I’ve decided to draw up a few guidelines. They’ll live here as a permanent link, but I’m posting them on the blog too to get things started. They’re a little tongue in cheek and I’m not going to take them overly seriously.

These aren’t for me to police the forums so much as to save you frustration and make sure we hear each other out, wherever we may fall on the grid of disputation.

I started Make Wealth History to learn what is going on in the world and what I could do about it. Commenting is often great at pointing me in new directions and refining my understanding. At other times comments are angry knee jerk reactions to things people don’t like hearing. These guidelines are to encourage more of the former, and help weed out the latter.

I may tweak these and add or remove stuff. Feel free to comment politely here, as the permanent link won’t be up for discussion.