In the past, most things that you owned were built to last. Household goods were expensive, and you looked after what you had, repairing things and maintaining them. In the early 20th century, new industrial processes and new materials – plastic especially – began to change that. One of the first and best known examples is the Dixie cup, invented in 1907 in response to a health scare about shared tin cups used at public water fountains. Vending machines with paper cups were a much more hygienic solution. Today, we get through billions of paper and plastic cups every year, 146 billion in the US alone.

It’s a funny thing, disposability. One-use items are often more convenient. You don’t need to wash them and put them away, or worry about breaking them, and they’re more hygienic, especially for medical equipment. On the other hand, it’s far cheaper to own real things and re-use them. Objects built to last are always more satisfying to use, they have weight and body and we can take pride in owning them. You don’t really own a disposable item, you just use it. Then there’s the waste. Sometimes it’s a palpable sense, when you gather up paper plates at the end of a party perhaps. Usually it’s not, and the problem of landfill, off-gas and sea plastic happen far away and without thought.

Each of us has negotiated our own compromises here. I take my mug with a lid to the coffee shop at the station, but I gather from the friendly Welsh man who serves me that this is unusual. We use real nappies on the boy. And yet I will read a newspaper and it won’t cross my mind that I’m consuming a one-use disposable item. I don’t take a plate to the pizza place down the road, although it’s less than a minute’s walk away and the thought has crossed my mind.

We all draw our lines somewhere, deciding what is acceptable and what is wasteful. The idea of ‘disposable fashion’ seems a step too far for most of us. Or perhaps one-use prefilled plastic wine glasses with tear-off foil lids – surely that’s crossing a line somehow.

I’ve been thinking about disposability because I read a reference recently to a 1955 article in Life magazine called ‘Throwaway Living’. I was curious and I looked it up. 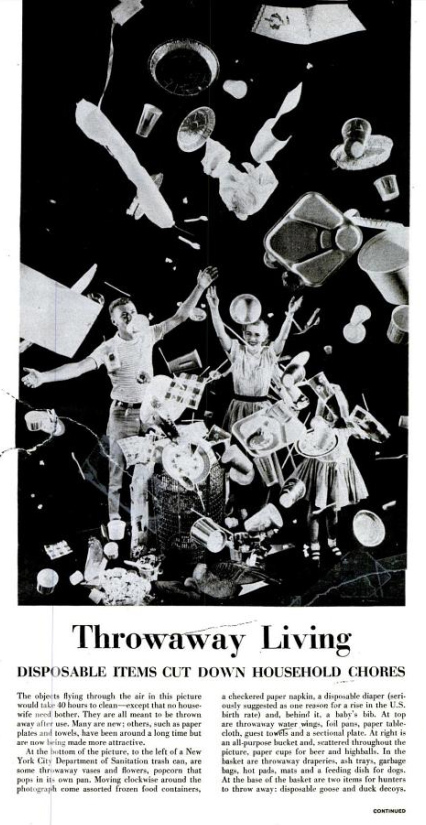 It’s a neat cultural artefact, evidence of the excitement around plastic (see also Disney’s plastic house of the future exhibit). The article is all about liberation, “the objects flying through the air in this picture would take 40 hours to clean – except that no housewife need bother. They are all meant to be thrown away after use.”

The picture includes familiar items like cups, foil trays, paper tablecloths and disposable barbecues. Other things didn’t catch on, like throwaway vases and flowers, buckets, or disposable guest towels. The picture also includes disposable duck and goose decoys in the bottom right, and I couldn’t tell you if those still exist or not.

What’s interesting to me is how our attitudes towards disposability have changed and continue to change. Here is a carefree, celebratory feel to throwing things away that might make many of us feel uncomfortable now. It looks naive, maybe even reckless. The idea of being able to eat off disposable plates and throw them away was thrilling and futuristic. Now it seems lazy, although only if we were cooking for ourselves and serving it up onto paper plates. (If it’s a takeaway, it’s okay to eat off disposable dishes – that’s one of the unspoken moral codes of disposability.)

Plastic bags are one of the areas where our attitudes are changing at the moment. There is a growing awareness that our plastic bag use is excessive, and that we throw away far more than we need to. In the last few years supermarkets have started offering recycling services. More of us take our bags to the shops, or chastise ourselves for forgetting. Enlightened places like Wales and Ireland have banned the use of free plastic bags and cut the use of them dramatically. Tabloid newspapers have run campaigns on plastic bags, a sure sign of a changing moral norm.

We still throw away too much, but our attitudes towards disposable things are changing and maturing. I may shake my head at those pre-filled wine glasses, but a glance back at that Life article shows where we might have been.