On monday I wrote about how bad forecasting by the energy agencies could be giving us a false sense of security about oil and how sustainable our lifestyles are. But there are other reasons why governments continue to find funding for roads and bailouts of car companies, while pleading poverty on public transport investment. One of the biggest is the network of existing relationships between government, fossil fuels and finance.

The World Development Movement has just launched an interactive widget that allows users to explore those relationships. It’s a striking graphic, showing the connections from the City to the fossil fuels industry, and from both of those into government. 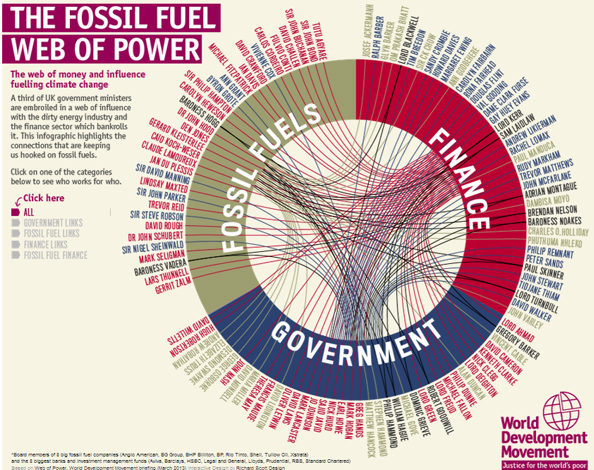 Fossil fuels are a capital intensive industry, and it relies on the big finance corporations to fund exploration and infrastructure. There’s a huge amount of money involved – £900 billion in fossil fuel shares on the London Stock Exchange, more than the GDP of the whole of Sub-Saharan Africa. The City invests in fossil fuels and shares in the rewards in return. The third partner in the network is government, with ministers moving from government positions into business, or coming from a business background into government.

Around a third of government ministers have links to either energy or finance companies. Sometimes it’s a strong link, such as a background in the sector or a seat on a board. Sometimes it’s more tenuous, perhaps accepting donations from the sector.  Some of the higher profile examples include business secretary Vince Cable, who was chief economist at Shell. Maria Miller was marketing manager for Texaco. Greg Barker, currently the minister for energy and climate change, used to work as a PR man for Anglo-Siberian oil and Sibneft, now part of Russian oil company Gazprom. On the finance side, Lord Deighton spent over 20 years at Goldman Sachs. David Laws held senior positions at JP Morgan and Barclays.

On the one hand, you would want senior ministers to have experience in relevant sectors, the higher up the better – unless you’re a Tea Party advocate who thinks the country is better run by ‘soccer moms’. The fact that a minister has links to big business does not in any way make them unfit to do their job, or make their motives suspect.

On the other hand, the closer that network of relationships, the heavier the weight of the status quo. The unsustainable systems we have today are reinforced, and become the default. Those pre-existing relationships become the ‘go-to’ people for solutions, even if the parties involved created the problems in the first place. The point that WDM make is that it a self-reinforcing cycle is created that prevents us moving to a more sustainable economy – the banks keep funding the fossil fuel industry because it makes them so much money, and the revolving door between government and business keeps the government from breaking the cycle.

Ministers have to declare their interests, so at least in Britain we are aware of this network – and that in itself is something to be grateful for. Those relationships should perhaps be better known, hence the campaign. Otherwise, it’s hard to know what to do about it.

Ultimately, I think one of the best solutions is to shake up the composition of government by breaking the hold that the two main parties have on power. That means electoral reform, and a wider range of voices in government. A change in the culture of government would make more radical ideas possible – in an age that desperately needs radical thinking.