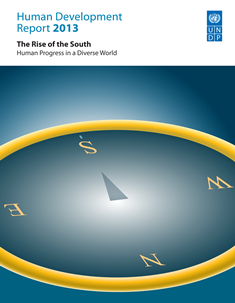 This week on the train I’ve been writing up some notes from the 2013 edition of the UN Human Development Report. It’s always well worth looking up as a measure of development progress, but also because each year has a theme and the comments are generally quite insightful. This year’s report looks into the rise of the global south.

One item of good news in the report is that there isn’t a single country in the world that has seen its Human Development Index score fall between 2000 and 2012. There have been short term dips in places, but the overall trend is upwards. This couldn’t have been said in the 90s, so there is really something to celebrate about that.

Among all the developing countries however, some have seen sharper rises in both income and non-income measures of progress. China and Brazil we know about, Uganda, Tunisia, Ghana, Vietnam and Chile are places we hear less about. The report looks at the strategy followed by these countries, to see if can identify common themes or policies. What drives development, and what could other countries learn from those making the fastest progress? Here are three broad patterns that the report identifies as drivers of development:

Developmental states often see rising public spending, making sure that education and health are incrementally improved as part of development, and aren’t seen as something to be added on once you ‘arrive’ at some notional level of wealth. That spreads the benefits of growth to everyone, creating inclusive development. It’s entirely possible to see economic growth that doesn’t include those that need it most, so pro-poor policies are an important aspect of the developmental state.

It also often includes industrial policy, creating and nurturing comparative advantage by protecting or prioritising certain sectors. Some of the most successful initiatives here have favoured labour intensive industries, creating large numbers of jobs and benefiting more people. This is often assumed to mean manufacturing, but countries can also modernise and formalise agriculture to create more stable jobs.

The report points out that there is a difference between ‘hard’ and ‘soft’ industrial policy, those that dictate economic directions and those that encourage and nurture them more subtly. Both can work, but each country needs to negotiate its own balance between the state and the markets. They need to complement each other, and the report insists that there is no one magic strategy to do that.

2. Tapping of global markets: The second big factor is engaging with global markets to ‘import what the rest of the world knows and export what it wants’. This is a two way process, of adopting new technologies and opening markets to international trade, and of looking for export niches at the same time.

However, engaging with global markets is a process. The idea that countries could be thrown open to international trade overnight was dramatically proven wrong in the 90s. Instead, the places that have done best have opened up slowly, “a gradual and sequenced integration with the world economy”. That could include reducing and removing trade barriers over time so that domestic businesses aren’t destroyed by imports. It could mean opening up to overseas finance, but only as joint ventures with local partners, something China and India have modelled.

A more controversial strategy, employed by countries such as Korea and Turkey, is import substitution. This is when a country limits certain imports in order to develop domestic alternatives, and then removes the protection once domestic industry is competitive. The IMF and World Bank have effectively banned this as one of their many loan conditions. That’s because the theory says it leads to inefficient, molly-coddled industries that couldn’t stand on their own two feet.

(At one point in my childhood, Madagascar limited soap imports to encourage local soap-makers, despite their fatty, stinking product being practically unusable. I can say from experience that the IMF are right when they say this can happen – but they are wrong to say it inevitably will happen. Like many economic ideas, it’s not about whether it works or not, but whether you do it right.)

Other ways that countries have successfully tapped into global markets is to raise competency and add value to exports. Chile, for example, has made a concerted effort to turn its well established timber exports into paper and furniture exports instead. The key here, a recurring theme in the report, is that this meant investing in people as well as infrastructure. “The lesson is that development cannot be sustained without adequate investment in people’s skills to constantly upgrade the quality of products and production techniques.”

One of the best ways to do this is through education, investing in ‘human capital’. Education for girls is particularly important. Healthcare and social care programmes such as pensions are also under this umbrella, as ways of making sure that the benefits of growth are shared across the whole of society. This also reduces conflict, builds stability, and increases government legitimacy. Social programmes are not luxuries for rich countries, they are essential to real development.

With a couple of notable exceptions (China and Brazil), countries that have grown without increasing inequality have raised more people out of poverty. There are lots of ways to integrate the poor into a growing economy. Some countries have opted for land reform, India has its National Rural Employment Guarantee Scheme. Mexico has a cash transfer programme specifically designed to break inter-generational poverty cycles. The report has a case study on how the Mexican Oportunidades scheme inspired Opportunity NYC, the first cash transfer programme in the US. It’s a nice example of another recurring theme in the report – developing countries innovating their own solutions, often contrary to the advice of the ‘Washington consensus’ of the IMF.

What drives development is one of the biggest questions in economics, and politics too. The UNDP haven’t got to the bottom of it by any means, but what’s great about their work is that it is rooted in observation, not theory. They are looking at what has worked in the real world. The economics textbooks wouldn’t necessarily recommend many of these ideas, but we can look at recent history and see that they have worked.

The other thing that comes through is that there are many, many ways to develop. The three themes here are very broad, covering many different policies and strategies. There is no one way to accelerate development, no ‘golden straitjacket’ as Thomas Friedman put it in The Lexus and the Olive Tree. But there lots of patterns that can be seen in the success stories of the last few decades.  The state and the private sector should work together in balance. Free trade is best seen as a process, and countries should open to international trade over time. And perhaps most of all, focus on people.