Interest in sport and environmental awareness haven’t necessarily gone together very often, but there’s one club that is aiming to change that. In 201o Forest Green Rovers took on Ecotricity as a key sponsor. With Ecotricity’s Dale Vince as chairman of the club, the relationship has developed into an intriguing experiment in sustainability in sport.

Forest Green Rovers, if you don’t follow the Blue Square Premier League, are just one division down from the Football League (same league as Luton, alas). They may be a small club in footballing terms, but their environmental credentials put the premiership to shame. They’re the only football club in the world to have achieved the EU’s gold standard in environmental management (EMAS).

They have a biodiversity action plan, there are solar panels on the stadium roof, and the pitch is maintained with a solar powered driverless robot. Many of the initiatives are experimental, such as the world’s first organic football pitch, or LED stadium lighting, in development at the moment. Meat has already been removed from the menus at the caterer, a move that got national attention, and they are working towards more local and seasonal food. You can still get chips of course, and the oil is recycled to make biodiesel. 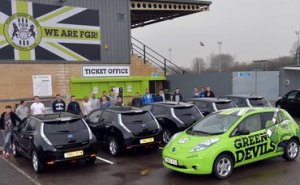 On transport, the club realised that if you added all the miles traveled by players coming and going from training, it added up to almost 10,000 miles a week. They began car-pooling, and then took on a fleet of Nissan Leaf electric cars, which can be plugged in to charge at the club. Emissions from players commuting has fallen by 83%.

Rainwater is collected from the pitch and harvested from the stand. Along with a borehole on site, the grounds will soon be off-grid, with rainwater flushing the toilets and irrigating the grass. You can view their full environmental policy here.

The club are also keen to model sustainability to the local community and to sport more widely. There are plans for a conference centre and education suite where schoolchildren can learn more about sustainability. Forest Green is also serving as a ‘test bed’ club for Sustainability in Sport, founded last year by Dale Vince and former Manchester United player Gary Neville. Here’s a short video with the two of them, and here’s their Facebook page.

PS – I’ve tagged this post as part of my ‘building of the week’ series because of the interesting things happening at Forest Green, but the stadium has been retrofitted and many of the environmental initiatives are about behaviour rather than design. There is one other stadium in Britain that I could be writing about under this tag, one that was designed from the start as an eco-stadium, but I’ll save that for another day…