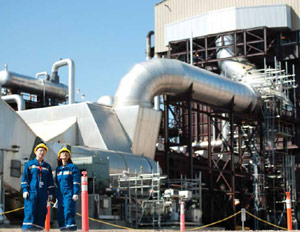 Those who believe that climate change can be tackled without reductions in economic growth or consumption depend on several key technologies. Electric cars is one, nuclear energy another, and carbon capture and storage is a third.

The case for carbon capture and storage (CCS) is simple. The world still has plentiful reserves of natural gas and coal. The latter in particular will be cheap for the foreseeable future. Finding a way to capture the carbon would allow us to benefit from these cheap fuels without adding to greenhouse emissions. By retrofitting carbon capture and storage to existing power stations, we could at the very least buy ourselves some time while renewable energy capacity expands.

Sceptics of the technology, on the other hand, say that it is expensive and unproven. There is a shortage of places where carbon can be stored, and they aren’t necessarily anywhere near the source of the emissions. Britain’s biggest potential carbon store is, for example, the depleted gas fields of the North Sea. It’s hard to imagine the sort of infrastructure needed to exploit that opportunity. The whole idea is a red herring, say the critics, an excuse to keep using coal.

So where are we? The Global CCS Institute has recently released its annual roundup of the state of carbon capture and storage. It has surveyed every operating or planned CCS plant around the world and reports on where the technology stands and how it could be adopted more widely.

First, the good news: CCS is not a theoretical technology. It works, and it can work at scale. There are 12 large scale plants in operation around the world. Three new ones opened in 2012, one each in Brazil, Saudi Arabia and China. Together, these 12 plants lock away 25 million tonnes of CO2 every year.

The other good news is that several others are planned. Two power plants with CCS are due to open in the US next year. China, once again, is at the forefront of new development, with 12 new plants planned. The technology is identified as a priority in the country’s five year plan. So it should be, with China’s dependence on dirty coal power and the world’s biggest carbon footprint. If anyone has the resolve and finance to deliver CCS, it is China.

There is bad news too. There is still no global climate change treaty, and therefore no real incentive for anyone to invest. Business won’t do it, and governments are increasingly unlikely to put up the funding. Five projects were cancelled in 2012 and seven delayed however. Norway’s ambitious flagship CCS plan was culled this year.

The other bad news is something that advocates of CCS usually forget to mention – what CCs is actually used for. Most plants are not built for sequestering carbon, because there’s no economic benefit. The majority are built to serve the oil industry, because waste carbon can be pumped into oil fields as part of an ‘enhanced oil recovery’ programmes.

When an oil field begins to age, oil production begins to tail off. There are various ways to get at the remaining oil and extend the life of the field. One of them is to pump CO2 underground to raise the pressure and drive oil to the surface. Oil companies buy in the CO2 from fertiliser factories or power stations that have CCS fitted, and pump it to the wellhead by pipeline. Some CO2 is sequestered in this way, but only as a by product. The main goal is more oil, which means more CO2 of course. So while this is potentially a green technology, it can equally be used in ways that are environmentally damaging. A full 70% of CCS plants in operation or at planning stages around the world are for the purposes of enhanced oil recovery.

That’s the big irony of CCS – it remains a useful tool in the fight against climate change, but at the moment it’s on the wrong side.  To make it effective in reducing emissions, CO2 needs to be priced in so that companies to take responsibility for it. CCS is not worth anyone’s time otherwise.

In short, CCS remains a potentially useful technology, but until we have a global deal on climate change, cap and trade or a similar emissions management strategy in place, that potential will not be realised.