All is not well in the City, and last week saw the latest in a string of banking scandals. Despite the regular declarations from the industry and their apologists, none of these scandals have seen any serious change either to banking behaviour or to the way the industry is regulated. The banks are caught, fined, and carry on as before. At least that’s how it appears to the rest of us.

So it feels like there is something of the zeitgeist about Molly Scott Cato’s new project, the Seven Deadly Sins of banking. It explains seven ways in which the industry goes wrong, with lots of detail and research under the visual wit. 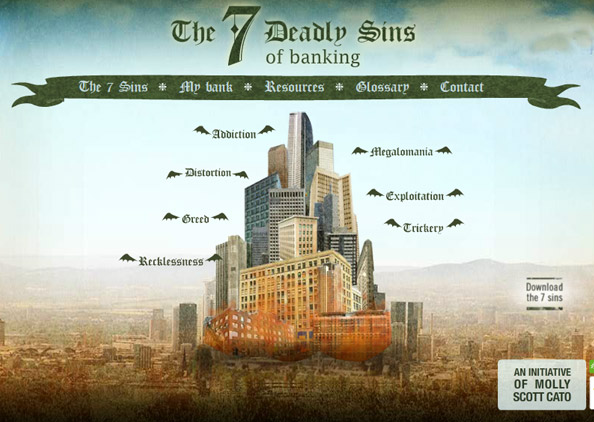 It’s a project from the Green Party, who Molly Scott Cato represents as an MEP, in collaboration with Green politicians across Europe. It aims to highlight some of the recurring wrongs in banking and what some of the solutions might be. I could tell you about them, but it’ll be more fun to go and explore them on the site itself.

Among the useful elements of the site is this comparison of the UK’s banks, measuring their behaviour over such ‘sins’ as tax haven use, speculation and debt. See how your bank holds up here.