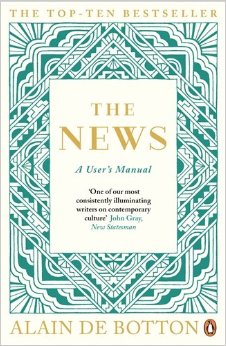 The news is a daily routine for many of us, through the papers, the internet, the radio and television bulletins. We might check in a few times a day, out of boredom, curiosity, or to see what is happening in the world. Keeping up with current affairs is, after all, what serious people do.

The news feeds us so many things to think about or worry about, it might not occur to us to stop and think about the news itself. “The one thing the news skilfully avoids training its eye on is itself, and the predominant position it has achieved in our lives” says de Botton.

That is a very privileged position indeed. After we’ve left formal education, the news is likely to be the main way that we continue to learn, so what it chooses to teach us is pretty important. How it talks about it matters too, setting the tone for public debate, and shaping our attitudes. What the news tells us, or doesn’t tell us, all builds up the “idea in our minds of the kind of country we live in.” Little wonder that so much of our politics is conducted through the news.

Alain de Botton has made a career out of writing philosophy for everyday life, looking at big universal themes such as travel, work, and religion. The News: A User’s Manual is in the same vein, a gentle probing of something that surrounds us all the time. Despite the ‘manual’ of the title, the author isn’t out to explain everything. Quite the opposite. The book “tries to complicate a habit that, at present, has come to seem a bit too normal and harmless for our own good.”

It does so in the short numbered sections that de Botton has come to favour, interspersed with quotes, lists and photos. Chapters follow the different themes that the news covers: politics, economics, celebrities, disaster. Mostly they just raise interesting questions and make observations, little things that will give us pause the next time we encounter them. Sometimes it’s something about ourselves as readers or listeners. If a news story makes us angry, for example, that’s a good thing – it shows we still believe in hope. Other observations highlight journalistic behaviour or bad habits. De Botton describes political ‘gaffe’ stories as an “escapist alternative to true investigation” fueled by the “impotent rage of journalists.”

Some of this commentary on the news is amusing, and some of it is pretty vital, the kind of thing we ought to teach in school. “If we are regularly told that many of our countrymen are crazed and violent, we will be filled with fear and distrust every time we go outside. If we receive subtle messages that money and status matter above all, we will feel humiliated by an ordinary life. If it’s implied that all politicians lie, we’ll quietly put our idealism and innocence aside and mock every one of their plans and pronouncements.”

The News is philosophical rather than political. It doesn’t delve into the ethics of journalism or privacy, or question the ownership of the press. But it does critique the news machine all the way through. Journalists shouldn’t be so quick to claim neutrality, he suggests. The news shapes our reality. It doesn’t just report on it. The news should consider itself to be an improving force on society, and make more space for hope, ambition and pride. It should give us more context to stories, telling us more background and helping us to keep things in perspective.

The author admits that when it comes to suggesting what the news could be in an ideal world, his is a “utopian project”, and this is where the book feels as its weakest. For example, since we tend to get stories out of context, international news should learn from travel writers and give us a sense of life in a place first. “If we are going to feel any concern about Ugandan news we will first need to know something about the mango trees in Kampala, whose sweet smells drift across the crowded boulevards after the almost hourly tropical showers.” Sure, that would be lovely, but if it’s travel writing that we need, then we should go and get that from travel writers.

Or take the suggestion that cultural critics should operate like pharmacists, prescribing the right films or artworks for our various moods. Since our responses to art are hugely subjective, that seems doomed from the start.

This is the seventh of his books that I’ve read, so I’ll admit to being a fan, but de Botton’s idealised news sounds insufferable sometimes. I think I’d rather live on a desert island than in a country where the weekend paper comes with a ‘conviviality’ supplement, or where disaster stories are grouped together under the heading of ‘vanitas’. But then, as a trained journalist who is married to a newsreader, perhaps I’m not the best person to judge.

Even though it annoyed me on occasion, I enjoyed The News immensely. If you are an avid news watcher, I’d highly recommend it. The news is far too important to let it be an entirely one way communication. We should all ask more questions about what we’re told.