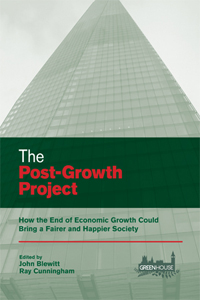 The Green House is a new think tank, established in 2011 to explore green political ideas. One of its main initiatives has been the Post Growth Project, aimed at exploring alternatives to the austerity and growth boosting that has followed the financial crisis. I’ve browsed various reports along the way, and they’ve now been compiled into a book.

The Post-Growth Project: How the end of growth could bring a fairer and happier society is a ‘second wave’ postgrowth book. It assumes that you understand the problems with the growth model and are interested in what comes next, building into the conversational space created by Tim Jackson’s Prosperity Without Growth. What would life in a post-growth Britain actually be like? And how do we move towards it?

It’s an ambitious brief and it doesn’t get all the way there, but it does contribute some key insights. As I’ve outlined before, there are a lot of unanswered questions and four key blindspots in particular. It’s easy enough to say that infinite growth on an finite planet is impossible, but our entire economy is predicated on that false goal and a post growth economy is thus a completely different animal.

One of my own questions has been about debt. If economic growth pauses or goes into reverse, the share of our income going towards debt repayments would grow into a crippling burden. Richard Heinberg suggests a jubilee approach, but other postgrowth books have skirted round it. I was pleased to see that economist and Green MEP Molly Scott Cato gives the issue a chapter to itself here.

Her approach to public debt is to convene a ‘Citizen’s Debt Audit’, which would examine what is owed to whom, and who would lose out if the debts were not paid. From there, debts could be reduced or rescheduled as appropriate. Any debt that was “incurred without the consent of the people and was not for their benefit” would be deemed odious and could be cancelled. This is not speculative – a number of Latin American countries have done this successfully, freeing themselves from debts that were a serious drag on the economy without the reputational loss that comes from default.

A little light is shed on some of the other holes in post-growth thinking. The issue of language is one, the vague nature of the term ‘post-growth’ and the negative connotations. These are tackled in a final chapter by Rupert Read, who I keep voting for in vain as MEP. He reflects on moving things away from economics and towards a broader understanding of a post-growth society, but comes to no conclusions over what we should call it.

Other chapters here deal with construction and the built environment, how to pay for public services in a post-growth scenario, and the politics of post-growth. Some contributors are more engaging than others and it’s not the most scintillating read – if you’re new to the idea, I’d recommend starting with Prosperity Without Growth and/or Enough is Enough, by Rob Dietz and Dan O-Neill. But if you’re serious about the question of growth and looking to fill out the picture, particularly in a British context, then it’s very helpful.