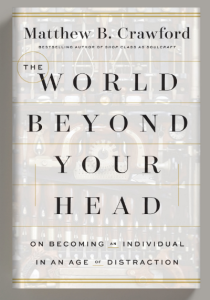 Matthew Crawford‘s The Case for Working With Your Hands is one of my favourite books, a work of profound but practical philosophy. I’ve been wondering what Crawford would write next, and it’s now out: The World Beyond Your Head – how to flourish in an age of distraction. It’s about how we steward our attention.

Crawford argues that what is often described as an ‘information economy’ could be described as an ‘attention economy’. The attention of individuals, what we choose to focus on, is a limited commodity and there is a lot of competition for it. We should see it as the resource that it is, he suggests. Because what we pay attention to is so important to who and what we are, we should be more choosy. And when people take our attention without our consent, we should complain.

For example, the encroachment of advertising in public space. I’ll use one of my own bugbears rather than his examples – the moving hoardings around the pitches at football matches. We’ve had advertising around sports grounds for many years, and it’s important to funding sport. But more recently, they move. They flash. I’m trying to watch the football, but my eye is drawn to the flashing coloured banners touting some gambling site.

This matters because I have not voluntarily given my attention to that advertiser. It has been taken. The human brain is wired to look at rapidly moving objects, loud noises and other stimuli that may imply danger. That instinct has been used by the advertiser to secure my attention, but it has been done against my will.

This has a social element too. If we are in company, and there is a TV in the background, our attention will be drawn to it whether we like it or not. That means we are depriving the person we’re with of the attention that they deserve.

“I would like to offer the concept of an attentional commons” writes Crawford.

There are some resources that we hold in common, such as the air we breathe and the water we drink. We take them for granted, but their widespread availability makes everything else we do possible. I think the absence of noise is a resource of just this sort. More precisely, the valuable thing that we take for granted is the condition of not being addressed. Just as clean air makes respiration possible, silence, in this broader sense, is what makes it possible to think.

An interesting idea, and a perspective on advertising that I’ve not considered before. I will have to think about that some more.