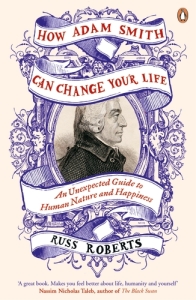 Adam Smith is well known as the father of modern economics, but his famous The Wealth of Nations is not his only book. In its shadow is The Theory of Moral Sentiments, a work of moral philosophy that was successful in its time, but is more of less forgotten today.

Russ Roberts is an economist who, like most of his profession, had never got around to reading Smith’s other book. When he did, he found it was “a marvel, a hidden gem” and well worth reading. But it’s also not particularly easy to read. It’s dated, a bit convoluted, and it “appears to begin midstream”. Modern readers may not be easily convinced of its merits.

Hence this exploration of its themes, full of quotes and commentary from the book itself, alongside Roberts’ own modern day examples and application. It’s similar to what Alain de Botton did with How Proust can Change Your Life, and Roberts has named his book in homage. Few of us have the time or inclination to tackle Marcel Proust’s seven volume masterpiece of a novel, so de Botton has read it on our behalf and told us the best bits. Sarah Bakewell did the same with Montaigne’s essays in the wonderfully titled How to Live: A life of Montaigne in one question and twenty attempts at an answer.

The Theory of Moral Sentiments has stood the test of time, in Roberts’ mind, because Smith was an astute observer of human behaviour. Though the writing style may have changed, human nature is the same as it was in the 18th century and his observations still ring true. We still grieve a small personal misfortune more than a far-away natural disaster that claims a million lives. We’re still prone to self-deception and justifying our mistakes. Our forefathers were just as likely to be suckered into buying the latest gadgets, or “trinkets of frivolous utility” as Smith puts it. “All their pockets are stuffed with little conveniences” he writes. “They contrive new pockets, unknown in the clothes of other people, in order to carry a greater number.”

His more famous work may be about wealth creation, but Adam Smith “wrote as eloquently as anyone ever has on the futility of pursuing money with the hope of finding happiness” says Roberts. For Smith, “the chief part of human happiness arises from the consciousness of being beloved.” That’s to say, knowing not just that we are loved, but that we are lovely. We want to be worthy of love and admiration, and our conscience constantly calls us to account for how others see us.

This is the counter-point to Smith’s views on self-interest. We’re all looking out for ourselves, but we also want to be loved and admired. Since we know that people who are purely self-interested aren’t considered lovely, we hold ourselves in check. I’d like to think there’s more to loving our neighbours than just loving ourselves indirectly, but it’s certainly a part of what’s going on.

One thing I found useful is Smith’s concept of how civilisation works. As Roberts summarises, “Smith’s vision of what sustains civilisation is the stream of approval and disapproval we all provide as we respond to the conduct of those around us.” This is how we do good in the world, for Smith. By being trustworthy, we build trust in others. We honour good behaviour and send out the message that this is what society rewards. Just as the market is created by many individual actors, so civilisation is shaped by millions of interactions. Our own our personal integrity, or lack of it, is negligible – but the sum of many negligible things is not.

For me, this brought to mind George Marshall and his comments on social silence and climate change. It’s normal to avoid the topic, but when we do talk about climate change, or respond well to our friends who express a concern, we help to change the social norms. We’re all taking our cues from each other and wanting to be loved. If people have it in their heads that mentioning climate change means awkward looks and evasion, then they won’t bring it up. It’s up to us to be more positive.

Has Adam Smith changed my life? No, and neither has Roberts’ book inspired me to rush out and buy a copy of The Theory of Moral Sentiments. But I do feel like I understand Adam Smith a little better, and Russ Roberts makes an amiable guide to his world. Hopefully the book will go a little way to rebalancing the popular image of Adam Smith too, as I’m not sure he’d be comfortable with the way he is name-checked.

One word of caution: just don’t think that reading this book will be a good shortcut to sounding more clever than you are. When he’d finished frowning at your exotic pocketry, Adam Smith would want to disabuse you of that idea: “The prudent man always studies seriously and earnestly to understand whatever he professes to understand, and not merely to persuade other people that he understands it.” So there.