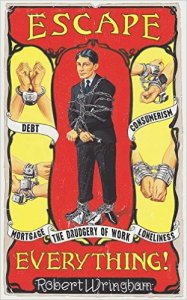 This is a book I’ve been looking forward to reading for some time, as I supported it in advance on Unbound. Robert Wringham is a writer, performer, and editor of the New Escapologist. His advocates a free and simpler lifestyle, and his book is all about escaping from work, consumerism, and despair.

Why would you want to escape? Because on average we will each spend 87,000 hours at work. That’s more of our lives than many of us are prepared to give, especially in a job that we don’t particularly believe in, or that doesn’t seem socially useful. Our timetables are decided in advance, and we have limited freedom to travel and see the world. Being tied to one place, we seek our consolation in earning and spending, acquiring a houseful of trinkets. Those, in turn, keep us in place: we have to keep earning to pay the mortgage, and now we have all this stuff to move around.

This, says Wringham, is a trap. And the thing to do with a trap is to escape it, preferably with flair and panache, like Harry Houdini.

The book begins by examining the things that deprive us of our freedom – work, consumerism, bureaucracy, and our own brains, which so often work against our better intentions. Then Wringham explores the things that actually lead to a good life, the true sources of satisfaction, and what life might look like if we were to spring the trap and pursue those instead.

Finally, we get to escape routes. The ideal is not, as the sceptics might suppose, to be a sponger or layabout, nor to win the lottery and live a life of affluent ease. The aim is to be master of our own lives, to do the work we choose rather than the work we feel forced into. That may involve a well chosen job or a part-time occupation, freelancing or being self sufficient. And it will also involve cutting back our expenditures.

That’s where the book is perhaps most subversive. Many people, when asking how they can get away without working, naturally ask how much they will need to live on. Wringham is more interested in how little we need to live on. “When you have half the desire of the average person you become twice as rich. If we want to make enough money to escape with a reasonable standard of comfort, we need to reconsider the values typically instilled into the worker-consumer.”

That means avoiding debt at all cost. Wringham lives alternately between Montreal and Glasgow, so he recommends minimalism to remain footloose and free to move. “Western culture has an acquisitive bent to it” he writes. “You’d do well to quash this desire.” Fundamentally, it’s a mindset. We’ll need to put aside competitive comparisons, social pressure to ‘get a proper job’, and silence our own status-seeking egos. That means there’s a degree of practice and discipline to escapology, as Houdini could attest.

Escape Everything is funny, tongue-in-cheek, but also wise and practical, with Wringham leading by example. There’s a social and environmental awareness to the book too. Though the focus is on freedom, there’s no doubt that ducking out of full time work is one of the most powerful responses to consumerism. As Wringham says, “quitting your job could be one of the most radical things you ever do.”

I really enjoyed Escape Everything. To me it feels like Wringham and I are preaching the same sermon, though Rob’s approach is more artful and entertaining. There are all sorts of things we can and should do to create a fairer and more sustainable world. But as the book says, “until society changes to facilitate a good life for all, we have escapology to get us there as individuals.”