There are all sorts of innovative technologies and companies in Chris Goodall’s book The Switch, but there’s one in particular that I caught my attention: Tropical Power. They’ve developed an intriguing energy system that is based on cacti. It’s being tested in Kenya at the moment, but there’s no reason why it couldn’t be applicable in many other parts of the world if it works well. 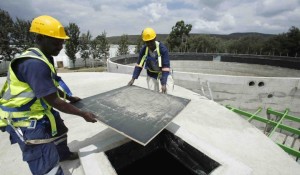 Tropical Power are pioneering anaerobic digestion in Africa, creating biogas from post-harvest waste from commercial farms. There’s a need for feedstocks beyond waste if these facilities are to operate at scale, but that presents a challenge. The company has made a commitment not to displace food crops in order to grow energy crops. It needed something that can be grown in quantity on dry marginal lands.

There are plants that will grow in very dry climates, such as cacti or agaves. These are CAM plants, that use Crassulacean Acid Metabolism to photosynthesize without losing water during the day. There are a few species that are grown commercially – pineapples, sisal, aloes – but growing CAM plants for energy is an idea that could open up some new economic opportunities in otherwise unproductive places.

Prickly pear and pencil cactus grow in abundance in the region. They don’t need any extra water or irrigation and you can harvest them without having to replant, so it would be a low-impact form of cultivation. You can’t burn them as biomass, but they rot down very well in a digester to produce carbon neutral biogas. Tropical Power intend to pair this anaerobic digestion with solar power to create hybrid energy plants. Solar will provide power to the grid during the day, with AD taking over after dark.

So here’s a renewable energy source that brings marginal land into production, creating jobs in semi-arid lands. That’s useful enough, but there’s more. There are two main by-products of the anaerobic digestion, and both of them are useful in their own right.

The first is water. Cacti retain moisture and once the rotting has started, excess water needs to be drained off from the AD domes. This can then be used to irrigate crops, perhaps in greenhouses. Mike Mason of Tropical Power is interested in trialing aquaculture on site. Fast-growing floating plants called Lemnacae could be produced, and then processed as cattle feed or food for fish.

The second by-product is the crumbly waste left behind at the end of the AD process. This is a natural soil improver, and it can be spread back on the plantations, or potentially used to create soil and grow more conventional food crops. That could ultimately enhance the land rather than deplete it.

Taken together, Tropical Power’s plans for CAM plants and anaerobic digestion could be one of those rare technologies that is not just renewable, but restorative.