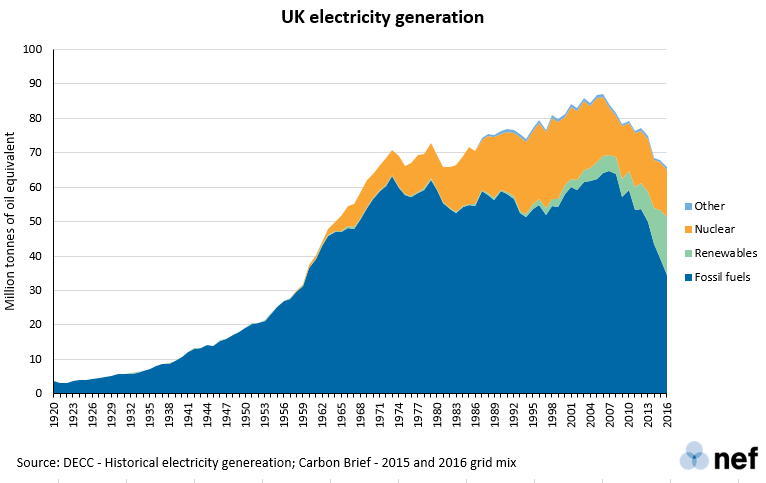 There are a couple of trends to note here. The first is the peaking of electricity consumption, with demand now falling due to efficiency improvements and the decline in energy-intensive industries. The second is the growing share of renewable energy, and between those things is the falling importance of fossil fuels.

There’s a long way to go of course – and this is just electricity use, not energy overall. Oil in transport and gas for heating are separate and more complicated challenges. But there’s no doubt that a transition is underway, and fossil fuel use for electricity is back to 1960s levels.

It’s worth looking at the big orange slice of that graph. That’s the contribution of nuclear power. Unpopular though it may be in environmental circles, consider how much worse our emissions would have been over the last 30 years if we didn’t have those power stations in operation. With their ongoing contribution, it’s entirely possible that half our electricity will be fossil free within a couple of years. That’s not a case for Hinckley C, by the way, which remains a bad idea for a number of reasons.

And on that point, let me re-iterate the observation from a couple of weeks ago that the decision to build a new generation of nuclear power plants was taken in 2008. Have a look at 2oo8 on the graph here. It wasn’t at all obvious that electricity demand had peaked at that point, and renewable energy was still an expensive and uncertain proposition. A lot has changed since then, and things are moving fast. With the long lead times on big projects, it’s hardly surprising that energy policy is struggling to keep up.