When I was a teenager there was a beach we used to go to in Madagascar that had glowing sand. It would spark if you kicked or dragged your feet on the sand at night. Since it was only on the wet sand that this occurred, I figured it was something in the water rather than the sand crystals. I suspect it was noctilucae, or sea sparkle. On a different night, I might have seen something more like this: 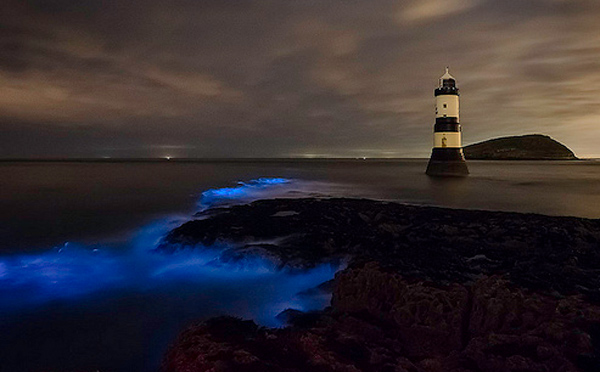 That’s the glow of bioluminescent plankton, and a similar capacity to emit light can be found in fireflies, jellyfish, and some bacteria and fungi. It’s an entirely biological form of light, the result of chemical reactions inside the animal or plant. If this can occur naturally, can we identify how it works and replicate it?

That’s what French start-up Glowee is out to do. They are experimenting with inserting the genes for bioluminescence into common non-pathogenic bacteria. These bacteria can then be enclosed in a transparent shell with a nutrient gel, and you have yourself an organic light bulb. No infrastructure or wiring needed, no electricity used, no pollution created.

This sort of bulb would produce a soft glow rather than a bright light, so it’s not going to replace the light bulbs in your house. But the company hopes they will illuminate buildings and shop fronts. They might work for road markings and signs.

The downsides? So far the company’s only commercial product is a light that last for three days. They hope to extend that to a month, but that’s still an awful lot of bulbs to change, especially since LED bulbs can last for years. So perhaps they’ll be most useful for special occasions, festivals, or seasonal illuminations.

So perhaps we won’t be basking in bacterial blue light on regular basis, but it’s a nice example of biomimicry, and I hope that Glowee can make it work.