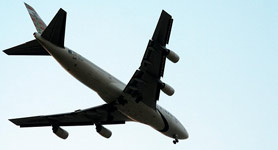 We’re still waiting for Britain to sign the paperwork*, but enough other countries have now ratified the Paris Agreement for it to be officially in force. Notably, the US and China signed on ahead of the G20 summit last month.

That’s good news, but one thing that isn’t covered by the global climate agreement is aviation. Since planes fly between countries, no individual nation wants to take responsibility for the emissions, and they have been exempt from carbon accounting. Nobody has aviation on their books, so there’s little incentive to take it seriously. Even if you did, you’d be lacking one of the most obvious levers for pricing in the environmental cost of flying: aviation fuel is exempt from tax too, thanks to a long-standing international agreement.

All of which means its been down to specialist bodies to negotiate with the industry and try and find solutions, and this week the UN’s International Civil Aviation Organization managed to wrangle a deal.

As we’ve come to expect from these sorts of agreements, how significant you think this is depends on whether you agree that any deal is better than no deal. If you do, then you’ve got one. Like COP21 last year, that’s not nothing, given the levels of disagreement. If you were hoping for an actual solution though, you probably won’t be surprised to learn that the agreement leaves a lot to be desired.

As usual, the fundamental issue is about expansion. All things must grow, in our growth obsessed system. GDP, shareholder value, airport capacity, and passenger numbers. So any talk of caps to aviation is a non-starter. Carbon pricing might have been a better approach, but that hasn’t worked either. Instead, airlines have agreed to off-set emissions through forestry and other emissions reducing projects.

If that wasn’t weak enough already, the benchmark for targeted reductions in emissions will be set at 2020 levels. Then the whole scheme will be voluntary until 2027, and then the agreement expires in 2035 anyway.

As aviation lobbyists love to remind us, emissions from aviation are in the single digits when we look at global CO2. How could 2% be a problem? The reason is – and I need to make a video about this at some point – that everything matters when you’re remember the carbon budget. We need to reduce emissions by 90%, which means that by 2050 aviation’s share will have gone from 2% to a whole fifth of the budget. And that’s without any growth. As we’ve just seen, aviation is figuring on biggering. So what will it be, if aviation keeps on growing? Half the pie?

Now bear in mind that it is the global elite who fly – only the richest 5% of the world have ever been on a plane, and the number of regular fliers is smaller still. That’s widening as low cost carriers expand in developing countries, but let’s say we double access and the top 10% can afford to fly. Do we really want to grant half the carbon budget to an activity reserved for the richest? Do we really want to make steeper cuts to electricity generation, heating, industry and agriculture to make room for it? Seems like a fairly serious justice issue to me.

So with all due respect to ICAO, I don’t think we’ve really got anywhere particularly useful with this week’s agreement. No source of emissions should be getting a free pass to keep growing, especially not aviation.

What do we do about it? First of all, this agreement covers international aviation, which is 60% of the total. Domestic aviation is covered by the Paris Agreement, and that other 40% is something governments might find easier to address. Building better alternatives is the most obvious way, ensuring that people have fast and efficient low carbon ways to get across the country. We can also reduce the need to travel through better communications.

On international travel, the frequent flyer levy is a useful idea that discourages people from flying too much, without impacting those going on occasional trips. And governments can send a clear signal about the importance of aviation emissions by ignoring the pitiful cries of the lobbyists about airport expansion. I’m talking about the Heathrow problem, currently burning a hole in Theresa May’s overloaded in-tray.

*If you want to help keep the pressure up, Greenpeace’s petition is one of several doing the rounds.