Last week I was at an event where we were discussing sustainability and inequality, and this slide came up in a presentation. It’s from an Oxfam report that you can find here, and it shows per capita emissions in a variety of countries. Specifically, it shows ‘lifestyle consumption emissions’. As it sounds, that’s a measure of carbon emissions based on the goods and services that we consume – car travel and flights, heating, food, consumer goods, etc. Each country is then broken down to show the difference in emissions between the richest and the rest. 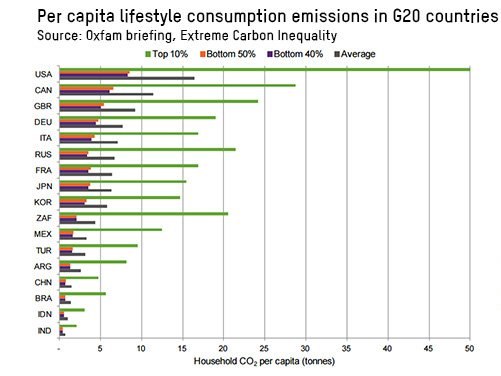 There are a number of things to draw out of this. The most obvious is that the richer people are, the more they tend to consume and the higher their carbon footprint tends to be. When you remember that climate change impacts fall first and most heavily on the poorest and most vulnerable, the injustice is stark. That’s true within countries as well as internationally.

The richest are most responsible for climate change, but the least affected. As I’ve said before, I reckon that when people look back on climate change in a hundred years time, they will have similar questions to the ones we ask about the age of slavery – how did the majority of people think that was okay? Why did it take so long for people to understand their moral responsibilities?

Another thing worth pointing out is the comparison between the USA and China. The carbon footprint of the richest 10% of Chinese citizens is lower than the poorest half of Americans, by some distance. China is the world’s biggest carbon polluter in total, but on a per-capita basis footprints are relatively small. China is not yet a nation of consumers. Most people don’t have a car or fly. The poorest half of China’s population – some 600 million people – have carbon footprints that would fall within a one-planet share.

The graph makes a good case for the basic principle behind my blog title. Those countries at the bottom of the graph are going to increase their consumption, along with all the other lower or middle income countries that aren’t in the G20. Nobody gets to deny poorer countries the right to develop, so if we have any hope of preventing catastrophic climate change, we have to reduce our emissions in the West.