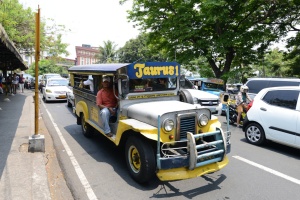 In Kenya there are matatus, and dala dalas in Tanzania. Columbia has Chivas, Haiti has Tap Taps, and in the Philippines it’s the Jeepney – all variants of semi-formal bus transport. Often called paratransit, these are buses that are unscheduled and fill the gaps between other forms of public transport. They’re found in cities around the world, and mainly serve those on lower incomes. They are remarkably self-organising, and often far more responsive to demand than centralised bus services. In some places they are colourful, eye-catching, and a vibrant part of local culture.

Unfortunately, they can also be badly driven and poorly maintained, and a danger on the roads. Most of them are diesel powered and cause major air pollution. They are frequently overcrowded and uncomfortable, and good luck getting everyone to wear a seatbelt.  Sometimes it gets political as well. A lot of people work on and around paratransit, and they are not afraid to make themselves heard when cities try to modernise and streamline their bus routes. Mayors and councils are often conflicted on what to do with them. They may promise reform or regulation, or even threaten to ban them, and then find they can’t live without them.

Paratransit works as a kind of anarchist free market for public transport, and some of the places that have handled it best are those that taken a hybrid system. Bogota, for example, kept the dynamism of paratransit, but streamlined it around the core services offered by its Bus Rapid Transit system so that they worked together.

Manila is a city trying to reform its Jeepney fleet at the moment, with mixed results. One of the more straightforward regulations is to get the oldest and most polluting vehicles off the road, with the long term aim of phasing out diesel vehicles in favour of electric buses. The number of e-Jeepneys is growing slowly, but electricity is expensive in the Philippines. Operators of electric buses have to charge higher fares, which make them uncompetitive. It’s doubtful whether there is the infrastructure to charge thousands of electric buses anyway.

That’s where the solar Jeepney may provide part of the solution. It’s a lightweight bus that can be charged overnight, but then tops up its battery throughout the day from its solar roof. It’s nowhere near self-sufficient, but it has extended range and lowers charging costs for operators. 45 of them are running in Tacloban City at the moment.

We might need to wait and see how they perform before declaring the solar Jeepney to be the future, but it’s certainly an idea to watch. Other companies sell solar buses already, and solar tuk-tuks. They make a lot of sense in cities with lots of sunshine, and as costs fall, they could help to provide cleaner public transport without higher prices.