A fridge is one of the most desired household appliances in the world, second only to a television. It can provide cool drinks and snacks, and the ability to store food safely for days at a time has revolutionised the way we cook and eat. Being born long after fridges became universal, it’s easy to forget how transformative they have been.

Humans have been able to control fire for thousands of years. Cool is a much more technical challenge, and the science of how cold works was mysterious and practically magical until relatively recently. But some ancient civilisations, without entirely understanding how it worked, had managed to harness cooling. 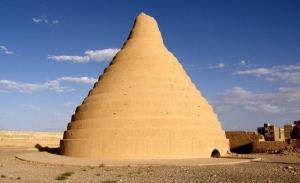 The only ancient civilisation to actually make ice was the Persians, who had elaborate irrigation tunnels from the mountains that provided water and cooling. They aso built large clay cone structures called Yakhchal that tapped low overnight temperatures and the cooling properties of evaporation to make ice. With ice production and storage facilities, even poor Persians were enjoying iced drinks and desserts two and a half thousand years ago.

These sorts of cooling technologies didn’t really spread very far, and most of the world relied on cutting ice in the winter and storing it, or bringing it down from the mountains. Where there was a suitable peak nearby, ice traders operated in Spain, Italy and Greece. Mule trains travelled at night to bring snow and ice down from high altitudes to sell it during the day. In India, a technique was used to cool damp clay pots until they developed a frost, which was then scraped off to make an early version of the slushie.

While ice was enjoyed in the East and the Mediterranean, it didn’t reach the West until the 1600s, when the nobility began building icehouses on the grounds of their estates. Many of them remain, mossy and mysterious to the visitors and tourists at Europe’s stately homes.

Much of Britain doesn’t get cold winters or snow on a regular basis, so some wealthy families adopted the techniques of the Persians and added freezing pools to ensure a winter supply of ice. They were built as shallow ornamental ponds, sited so that they were shaded but wind-blown, thus maximising the chances of freezing over. The servants would hurry out at first light and clear the ice into the icehouse.

The trend for ice crossed the Atlantic in the 1700s, but soon began to democratize beyond the wealthy.  North American winters are much more predictably cold, so ice could be reliably sourced. Timber icehouses were developed that were as effective as the elaborate brick constructions in Europe, but a fraction of the cost. Ordinary people and homesteaders began to cut ice in winter and create cold stores for preserving food.

In 1803 a farmer called Thomas Moore developed a snow-powered coolbox and used it to transport his butter to market. He called it a refrigeratory, patented it, and predicted that one day everybody would have a device like it to store food, prolong the life of milk and meat, and to serve chilled drinks. Farmers and traders would all want them. Fishermen could sell fresh fish further inland. But he would not be the one to sell it to them, as he became an engineer instead. 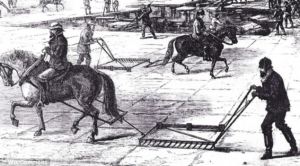 In the coming decades a profitable ice business would develop, pioneered by Frederick Tudor, the ‘Tudor Ice King’. Insulated warehouses were built in Charleston and New Orleans, and ice cut from the northern states was sold in the southern states, as well as the West Indies and Cuba. Horse-drawn saws were developed that could cut ice into regular blocks, making it easier to store and transport. American ice cutters exported to Europe and even to India, with Boston sailors learning to use ice as ballast.

Almost all of this ice was consumed in drinks or desserts of one sort of another, rather than used for preserving food. But it was cut from lakes, rivers and ponds and was not as pure as it looked. As the ice in one’s drink melted, little bits of dirt and algae would sink to the bottom. A bowl of ice cream could come with a side order of typhoid or dysentery. Dirty ice spurred the development of artificial ice, first in the places where natural ice was most expensive or impossible to get. 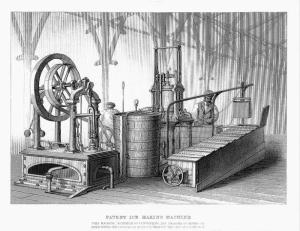 After a couple of commercially unsuccesful attempts elsewhere, the first patented ice machine was built in Australia in 1851. It was invented by a Scotsman called James Harrison, and it was steam powered, with a compressor and a flywheel. A second version was made to chill beer instead of making ice, and this could be considered the first proper refrigerator. Unwieldy though they were, Harrison’s machines were soon installed on ships, making it possible for Australia to export fruits and meat for the first time. By the turn of the century, artificial ice had more or less taken over. (There’s family history here, my mum tells me. My great grandfather, Hugh Milne, built the first refrigerator in The Rock, New South Wales, and supplied the town with ice.)

Back in the home, ice was becoming cheaper and more widely available, and a growing number of people could afford to sign up for regular deliveries. Households installed an icebox – basically an insulated cupboard with room for a block of ice at the top. The iceman would drop by and cram a new one in as it melted, and you could keep food cold. My grandparents’ generation would have been familiar with this domestic routine into the 1940s. (It has been suggested that staying in for an ice delivery was one of the things that kept women in the home, and that automatic refrigeration had a role in the emancipation of women.)

The first proper kitchen fridge went on sale in the US in 1918, but it was not an overnight success. They were expensive, and not many people had access to electricity anyway. Refrigeration had proved tricky to scale down, and early domestic versions had a nasty habit of catching fire. Prices fell and reliability improved over the decades. Most families could invest in a fridge in the American post-war boom. Things moved a little slower in war-damaged Europe, and in 1965 only a third of British homes had a fridge.

Today, billions of people around the world benefit from the advantages of refrigeration. It is used all through the supply chain, and makes out-of-season foods possible. Supermarkets and the ‘weekly shop’ would be impossible without a fridge, along with a vast array of convenience foods and fresh products. Beyond the home, refrigeration runs all sorts of key processes, from storing blood supplies and vaccinations, to cooling MRI scanners. Air conditioning, which uses the same basic technology as a fridge, keeps us cool in our homes, offices and cars.

The history of the fridge isn’t over. In Africa, India and much of China, the market is far from saturated. Millions of people would benefit immensely from a fridge, and cannot afford one. Farmers need cold stores to help stop harvest losses. As the climate warms, cooling is going to become much more important than it is today.  And yet refrigeration in the 21st century is much more efficient than it was, but still runs on the same technology as it did 100 years ago. There is enormous potential for innovation. A cheaper, lower energy fridge is possible, and could yet sweep the developing world. Passive techniques that the Persians were using thousands of years ago could be reinvented.

Another reason why refrigeration can’t remain the same indefinitely is its energy footprint. Fridges run 24 hours a day, and in many homes they represent the single biggest use of electricity. Altogether, the world’s fridges take up 14% of its electricity and a proportionate amount of CO2 emissions. We have to cut emissions by 90% by the middle of the century. Even without the HFCs problem that I’ve written about this week, climate change is going to force some fresh thinking in the world of refrigeration.

But the future of refrigeration? That’s a post for another time.